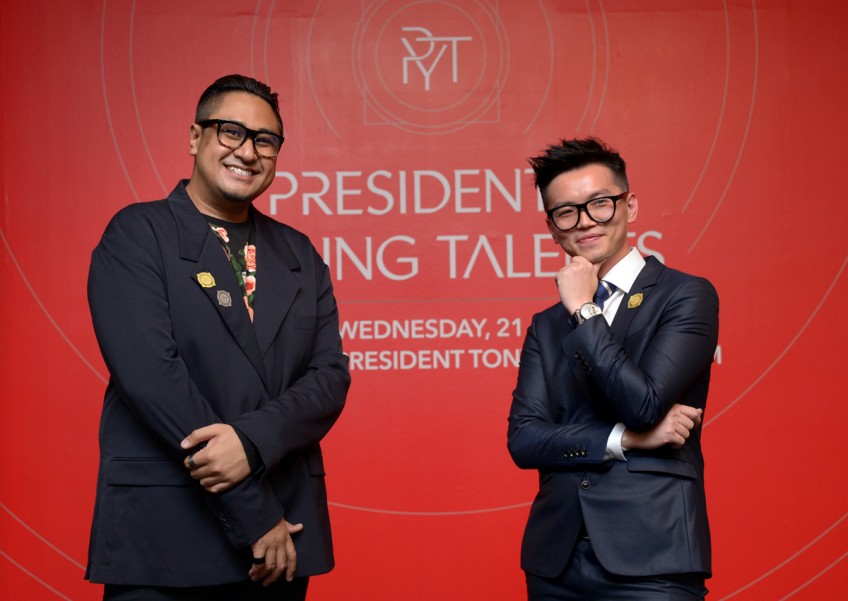 Mr Ezzam Rahman (left) uses his dead skin to create miniature flowers and raises questions about matters of the flesh in his work Here’s Who I Am, I Am What You See. Mr Ong Kian Peng gives a grim reminder of climate change in his installation Too Far, Too Near.
The Straits Times

In the 2013 edition, film-makers Boo Junfeng and Liao Jiekai were joint winners.

President Tony Tan Keng Yam presided over the awards ceremony and gave away the cash prize of $20,000, which is to be shared equally between the two artists.

The cash prize can be used either for the creation of a new work or an artist residency to further develop their practices.

So, while Mr Rahman creates fragile, miniature flowers from his own dead skin and raises unpalatable questions about matters of the flesh in his work Here's Who I Am, I Am What You See, Mr Ong's evocative Too Far, Too Near installation is a grim reminder of climate change.

Their work can be seen at the President's Young Talents exhibition at the SAM.

The exhibition also shows how contemporary art here is evolving and how artists are increasingly taking on global issues in this inter- connected world.

Congratulating the winners, SAM director Susie Lingham said: "We are impressed with the quality of works produced by all the finalists.

"In selecting joint winners for this year's prize, we embrace the plurality of voices that make up the world of contemporary art and acknowledge the diversity of artistic visions."

Other multi-disciplinary artists in this year's President's Young Talents exhibition, which runs at SAM at 8Q till March 27, are Mr Loo Zihan, 31, Mr Bani Haykal, 30, and Mr Ang Song Ming, 34.

Both winners looked visibly surprised when their names were announced yesterday.

Mr Rahman called the award "a stepping stone, a milestone for us which opens up new opportunities".

Ong called it "a very fair platform" for emerging artists as it is not judged based on a body of work.

He added that the award "opens doors for me as a media artist".

It is the only mentoring and commissioning exhibition, making it different from other art awards.