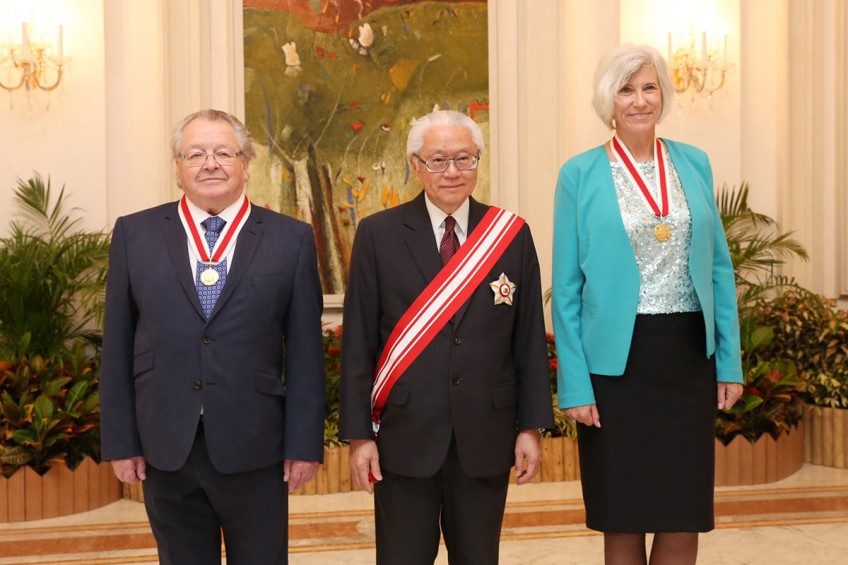 President Tony Tan Keng Yam with recipients of the 2015 Honorary Citizen Award: Sir George Radda (left) and Dr Joan Rose. Prof Radda, was recognised for playing a pivotal role in Singapore's biomedical sciences industry, while Dr Rose, was honoured for her efforts in developing a more self-sustainable water supply for the Republic.
PUB

For 17 years, American Joan Rose has had a keen interest in adapting Singapore's water supply from relying on external sources to becoming more self-sustainable.

In 1998, when the Republic embarked on an exploration of making used water potable, the microbiologist was invited to be part of a panel of international and local water experts providing advice. The panel also conducted reviews to make sure that water quality surpassed international standards.

Since then, Newater has become part of everyday life and by 2060, is expected to meet up to 55 per cent of Singapore's water demands.

For her efforts, Dr Rose became an Honorary Citizen yesterday, the highest award that can be given to a foreigner. She is the first woman to receive the accolade in its 10 years.

The annual award recognises foreigners for their significant contributions to the country, and gives them and their dependants the right to live and work here.

At an interview with The Straits Times on Tuesday, Dr Rose, 61, who is married with two children, said she was overwhelmed.

"I have just gained so much from coming to Singapore - knowledge and science, and friendship," she said. "And just being part of something for so long, it has been such an honour for me."

Based at Michigan State University, where she does water research, the Michigan native has chaired national water agency PUB's External Audit Panel since its inception in 2003.

The panel of local and international experts independently assess areas, such as the toxicology, quality and chemistry of the country's water from source to tap.

The Hungarian chemist established the Singapore Bioimaging Consortium, which he led as chairman from 2005 to 2010, and the Clinical Imaging Research Centre, which is one of the few research centres in the world focused on clinical imaging.

"The biomedical sector in Singapore has matured significantly over the last decade as a result of the country's commitment to research and development.

"I am pleased to have played a part in shaping Singapore's biomedical research landscape," he said.