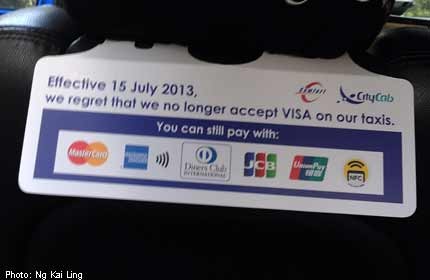 SINGAPORE - The wrangle over credit card surcharges got worse yesterday, when Visa revealed that two more taxi companies will no longer be allowed to accept its cards.

Premier Taxi and TransCab have joined ComfortDelGro in refusing to budge on the 10 per cent extra that cab operators charge for credit and debit card payments.

While no date was given for Premier, TransCab said that Visa cards cannot be used in its taxis starting July 15, the same cut-off date for ComfortDelGro.

It was first reported in The Straits Times in March that Visa would be pulling out of ComfortDelGro cabs in the middle of the year.

Visa's country manager for Singapore and Brunei, Ms Ooi Huey Tyng, said yesterday: "We believe that consumers should be free to choose their preferred form of payment. Those who decide to pay with their cards should not be penalised. Unfortunately, after lengthy discussions, we could not reach the outcome we hoped for."

The credit card company maintains that by surcharging, these firms were in breach of licensing agreements.

But the three taxi firms were unmoved, with one insisting that they should not be made to fund Visa's business.

"They (Visa) allowed us to do it. Why didn't they tell us from the start?" he asked, pointing out that taxi companies have to pay banks a fee for every card transaction. A check with various merchants found that banks charge a fee of 2 per cent to 3 per cent.

"Who is going to bear these costs? We cannot expect the taxi drivers to do so and we cannot bear the costs. They (Visa) want to make money at our expense... We will not subsidise their business."

But there is more than bank fees to factor in.

Commenting publicly on the issue for the first time, ComfortDelGro spokesman Tammy Tan said the fee it charges "reflects the cost needed to continually invest and maintain the cashless payment terminals and systems, as well as to pay bank fees and telco charges".

The system was a "sizeable investment" of about $10 million, she said, adding that it "was not paid for by credit card companies". ComfortDelGro is the largest taxi operator with a fleet of 16,000 cabs.

A TransCab spokesman reiterated Ms Tan's point, saying that the surcharge is to cover costs.

MasterCard Worldwide and American Express, two other major credit card companies, also oppose the surcharges, but have not followed Visa's lead in stopping taxi firms from using their cards.

Events company owner Logan Munusamy, 53, who takes cabs five days a week, is worried about the inconvenience the latest twist in the dispute will cause commuters like him.

He said: "We're trying to become more cashless. But this is a step back. If other retailers are not allowed to surcharge, why should taxis be treated differently?"

He added that because of the higher surcharge, just a few of his customers use Visa. Nets and ez-link cards attract an "administrative fee" of only 30 cents.

Consumers Association of Singapore executive director Seah Seng Choon has called on both sides to end the "spat" quickly so that commuters will not be caught in the middle.