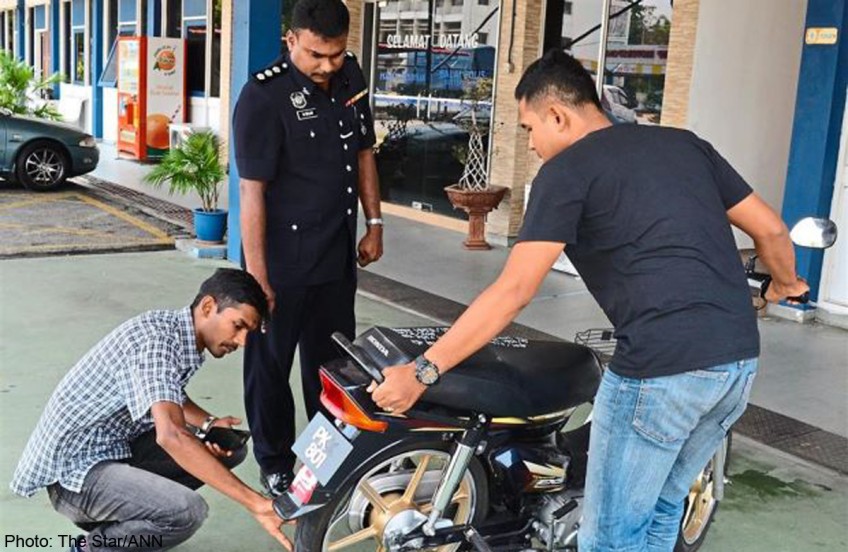 A 'cycle' of crime: ASP Thanabalan (centre) looking at the stolen Honda EX5 which was recovered from the suspects suspects who stole it to go to the Bukit Mertajam Court.

BUTTERWORTH - Two youths stole a motorcycle to attend their trial at the Bukit Mertajam magistrate's court for motorcycle theft.

The two males, who were out on bail, were caught by police again.

They stole the Honda EX5 shortly after they arrived at the Penang Sentral temporary bus terminal here yesterday from Kelantan in a bus at 6.20am.

North Seberang Prai OCPD Asst Comm Abdul Rahman Ibrahim said the two, aged 19 and 20, walked to the Bagan Dalam flats about 1km away and stole the motorcycle parked there.

A police team on crime prevention rounds spotted the suspects behaving suspiciously nearby several minutes later and gave chase when they refused to stop when flagged down.

He said the team, led by Asst Supt M. Thanabalan, caught them after a 2km chase.

ACP Abdul Rahman praised his men for their quick action.

He said the suspects were among four people who are believed to be members of a motorcycle theft syndicate called Awe Kelate caught in Jalan Kubang Semang near Bukit Mertajam on Feb 9 with stolen motorcycles.

It is learnt that the two had planned to steal one more motorcycle after their trial to ride back home on a motorcycle each had they not been arrested.