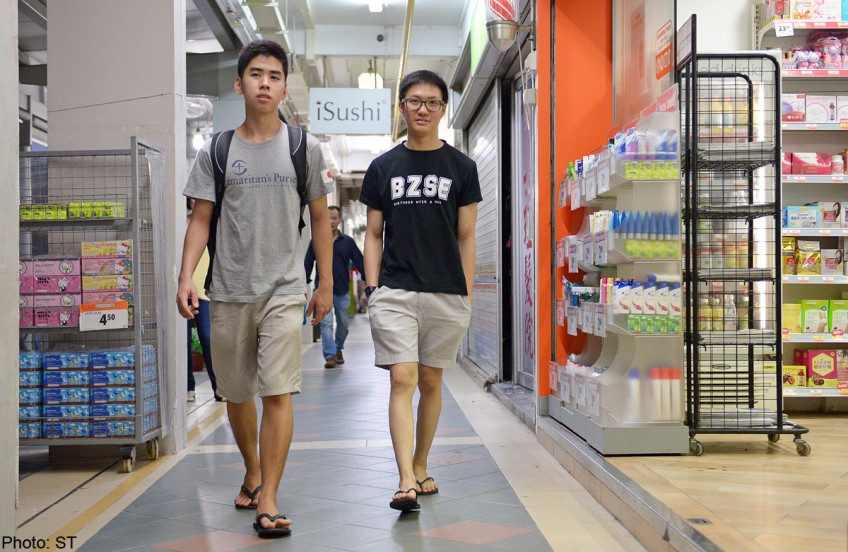 SINGAPORE - They left behind the comfort of air-conditioning, along with having a room and bed to themselves, to rough it out like paupers.

Since last month, home for Ngee Ann Polytechnic students Nicholas Fheng and Lewin Loh, both 19, has been a bare HDB flat in Bedok South, where they sleep on thin mattresses and buy the cheapest of everything they need.

The mission? To understand and shed light on the plight of those who live on less than $1,500 a month in Singapore, as part of their final-year school project.

This includes having to live on $790 a month, and not being allowed to accept aid from friends or family.

Even scoring an interview with the two ambitious teens was tough, as they have to think twice about answering a phone call on a pre-paid SIM card because it costs more than a text.

They are one week away from completing the two-month project, as part of their business and social enterprise diploma.

"One of the things we have been taught is to understand the needs of the people we want to help. There's no better way to do that than to put ourselves in their shoes," Mr Loh told My Paper during a recent interview at a coffee shop.

Mr Loh is a packer at a supermarket and carries and unpacks fruit and vegetable boxes weighing 20kg to 30kg.

As cleaner-cum-stall assistant at a coffee shop, Mr Fheng clears customers' dirty plates, and cleans up after them. For a month before that, he worked at a warehouse storing gym and music equipment.

Both earn about $6 an hour.

Their daily routine involves waking up at about 6am, working and getting home to cook, clean the house, and get some laundry done.

They live in spartan conditions, save for a fan, a fridge, thin mattresses and a portable stove. They wash their clothes by hand.

Mr Loh misses being able to eat whenever he wants, and Mr Fheng misses watching movies.

It almost sounds like a survival challenge, but Mr Loh said that it is not.

His biggest lesson learnt so far has been that the approach to helping people in the low-income group should not be top-down.

"We have to understand them by building a relationship with them, and not force help on people," he said.

Though they lead a tough life now, they acknowledged that they could not replicate totally the lives of those who are in the low-income bracket.

"There are certain aspects we won't face - health problems, kids, having to support a family," noted Mr Fheng.

However, their jobs are no mean feat. In fact, during the interview at the end of a long, tiring weekday, they looked visibly exhausted, with Mr Fheng having to take time to collect his thoughts.

But no matter how tired they are, they still spend several hours once a week visiting low-income families with social workers.

They are thankful that their jobs have given them some perspective.

Mr Loh now thinks that all jobs, no matter how big or small, are equally important.

He had been working for 20 days without a break because the supermarket is short handed. But he has started to enjoy his job, and likes his older colleagues.

In fact, they have grown so comfortable with him that they have taken to matchmaking him with girls around his age.

For Mr Fheng, all it takes to make his day is a "thank you" when he is clearing plates.

The two of them also simulated the life of the homeless, spending two nights away from home and talking to others who set up on the streets. They did not sleep, showered in public shower facilities and went straight to work.

Mr Fheng was most moved when he experienced the generosity of a low-income family.

He said: "There was a family that was more than eligible for aid. But they said, 'Give it to someone who needs it more than us'."

To find out more about their journey, visit livingonless.sg.