Unhealthy levels of haze to persist on Monday with unfavourable winds 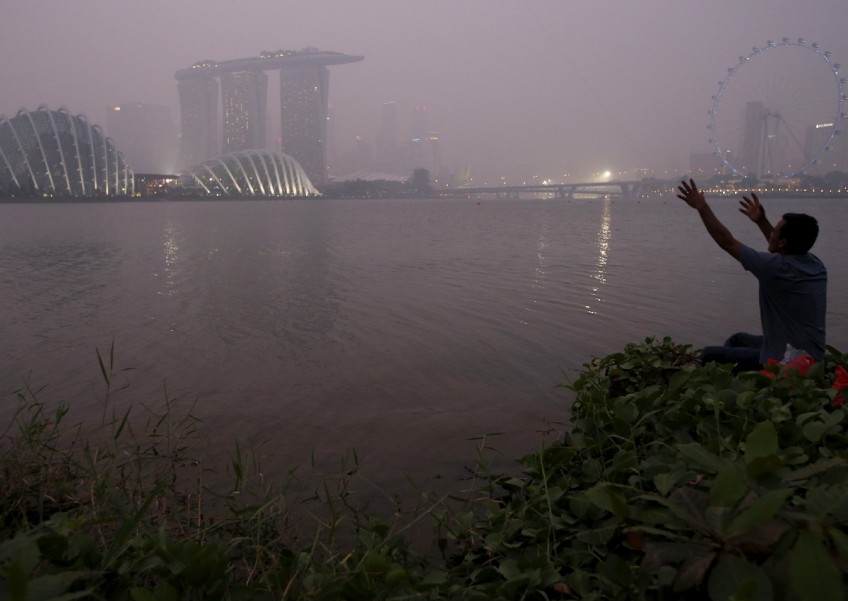 A man cast his hook as he line-fishes along the bank overlooking the city skyline shrouded by haze in Singapore October 23, 2015.
Reuters

SINGAPORE - Air quality in Singapore may deteriorate further on Monday if denser haze from Kalimantan is blown in, the National Environment Agency (NEA) said in its daily update today (Oct 25).

Readings from the Pollutant Standards Index (PSI) is expected to remain in the mid to high sections of the unhealthy range, NEA added.

For today, a total of 212 and 3hotspots were detected in Kalimantan and Sumatra respectively, down from Saturday's count of 324 and 4.

PSI readings in Singapore have been increasing steadily, with the 8pm 3-hr PSI peaking at 159.

Singapore's Ministry of Foreign Affairs (MFA) said in a statement earlier on Sunday that the nation's direct involvement in the fire-fighting efforts in Indonesia may have ended, but the government will continue to tackle the root causes of the fires that cause haze.

Two key points were highlighted by MFA: Enforcement against errant companies contributing to the haze, and bilateral and regional environmental co-operation to prevent the recurrence of forest fires.

Singapore has been offering haze assistance packages to Indonesia since 2005, and most recently, a team of 40 Singapore Armed Forces (SAF) and Singapore Civil Defence Force (SCDF) officers was deployed to Palembang in Sumatra to aid with firefighting efforts.

The team concluded their two-week deployment on Saturday (Oct 24), putting out more than 50 hot spots in Sumatra in the process.

The haze has killed at least 10 in Indonesia and caused respiratory illnesses in half a million, Jakarta authorities said on Sunday, while winds have carried the smoke into Singapore, Malaysia, Thailand and the Philippines this year.

[[nid:225470]]
SUBSCRIBE TO OUR NEWSLETTER
Your daily good stuff - AsiaOne stories delivered straight to your inbox