Unionists 'must not fear hard solutions' 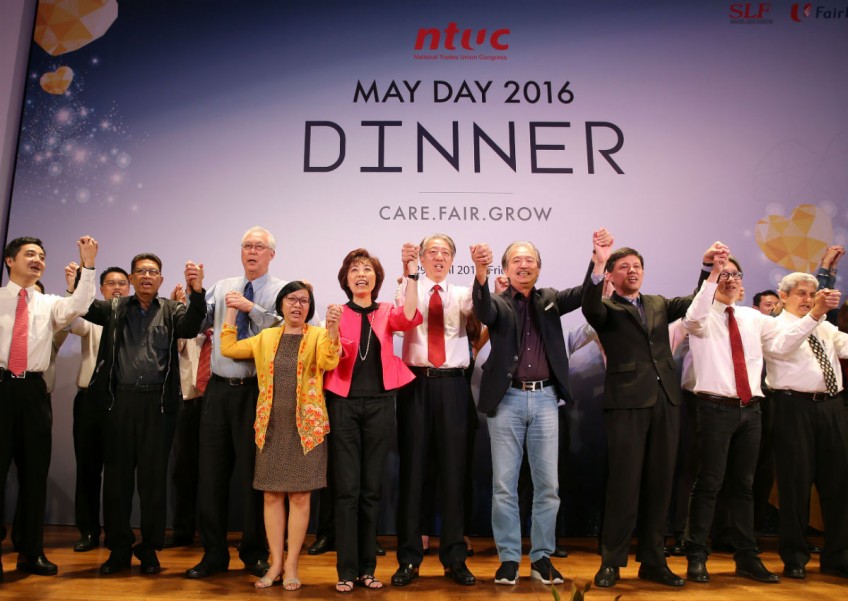 Union leaders should not be afraid to strike out on their own and defy conventional wisdom as they seek solutions to problems, said labour chief Chan Chun Sing.

They also should not sugarcoat the problems for workers or take the easy way out by pursuing policies that do not benefit workers in the long run, he added at a May Day dinner last night. "We need leaders with the correct attitude," he said.

Mr Chan, who is the National Trades Union Congress (NTUC) secretary-general, cited minimum wage as an example of a policy that the labour movement rejected.

Instead, it came up with its own progressive wage model for low-wage workers like cleaners and security guards, that sets a wage ladder where workers can get higher pay as they upgrade their skills.

In his speech, Mr Chan also rejected calls for unemployment insurance for those who lose their jobs. The best insurance for workers is to ensure that their skills are relevant and they remain employable, he said.

Turning to tripartism, Mr Chan noted that the three-way partnership between the Government, NTUC and Singapore National Employers Federation (SNEF) is strong and the partners will "step up the gear" in several areas. These include drawing up manpower plans for 25 sectors, and helping workers plan their careers and settle disputes.

"The NTUC is like a three-pin plug, plugged into the tripartite government ministries," said Mr Chan, referring to the Manpower Ministry that is headed by former labour chief Lim Swee Say, the Ministry of Trade and Industry, and the Ministry of Education. NTUC's relationship with the ministries ensures it has the resources to implement its programmes.

Union leaders agreed that when it comes to explaining policy decisions to workers, it is important to help them see the long-term benefits, even if it is a hard pill to swallow in the short term. "We should not sugarcoat and let them feel that it is a good medicine. As the Chinese believe, bitter medicine will allow a person to recover faster," said Mr Andy Lim, deputy secretary- general of the Singapore Manual and Mercantile Workers' Union, which has some 96,000 members.

United Workers of Electronics and Electrical Industries general secretary Tan Richard said he works with branch officials to communicate initiatives to around 66,000 members. "As long as we can put it across and make it clear to members and workers, once they understand and capture what the labour movement is doing, we can work it out together," he said.

In a separate speech, NTUC president Mary Liew said the NTUC will continue to help workers grow by enhancing their employability and working with employers to ensure there is fairness at workplaces.

The May Day dinner last night, attended by some 1,600 union leaders, business leaders and government officials, kicked off the annual May Day celebrations. NTUC also gave awards to 91 individuals and organisations that contributed to the labour movement. Topping this year's list is Ms Diana Chia, NTUC's first woman president, who held the post from 2011 to last year. She received the Distinguished Service (Star) Award.

Mr Chan said: "There is much that we can learn from her and she is a powerful testimony to what we union leaders should all aspire to."

This article was first published on Apr 30, 2016.
Get a copy of The Straits Times or go to straitstimes.com for more stories.