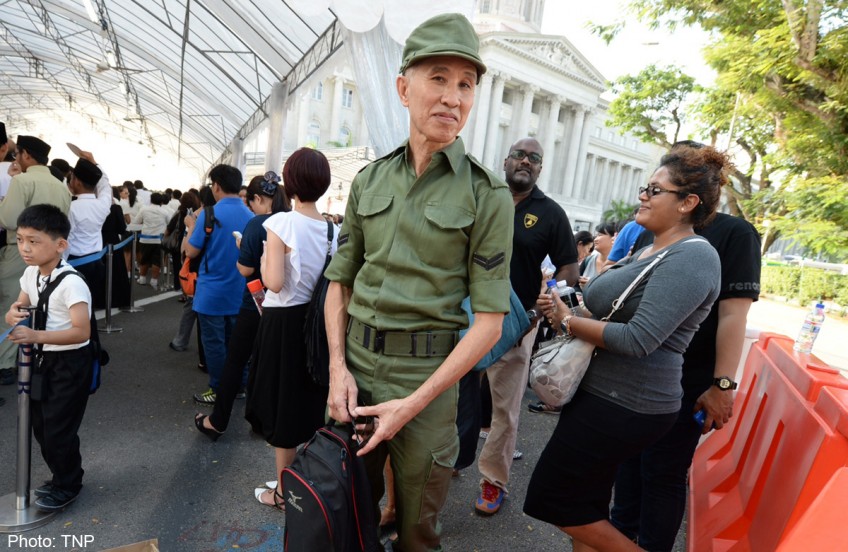 Singapore suffered a great loss with the death of its founding father, Mr Lee Kuan Yew, on Monday morning.

The Government declared a seven-day mourning period, and huge crowds formed outside the Istana and Parliament House to pay their respects.

Amid the tears, people found other ways of commemorating Mr Lee Kuan Yew in a Uniquely Singaporean way. The bright golden yellow flower, with a green tinge, is from the same line named for Mr Lee's beloved wife, the Vanda Kwa Geok Choo. Mr Teo decided that the workout should revolve around the numbers 65 (1965, the year of Singapore's independence), 91 (Mr Lee's age at his death), and 2015 (marking 50 years of independence) In Chinese, the name of the bun means "Can't leave you," with the word "leave" swopped for Mr Lee's surname, which sounds similar.

Sold at $2 each, proceeds from the bun were originally intended to go to charity.

However, the public accused BreadTalk of being too disrespectful, and the bun was quickly pulled from the chain's outlets.

BreadTalk will still donate $30,000 - the proceeds collected form bun sales so far - to the Community Chest. When the bust arrived, however, Mr Sim liked it so much he decided to order more.

Mr Sim said Mr Lee is his greatest hero, and felt privileged to have such a leader.

He has donated three to the Institute of Technical Education colleges, and dreams that the rest can one day go to Singapore embassies around the world. Mr Barker said that whenever people asked him why he decided to get a tattoo of Lee Kuan Yew, he would reply: "He's a great man, he deserves it, and I want to give him recognition."

Mr Barker, who has lived in Singapore since 1973, was initially not a fan of Mr Lee's policies.

But eventually, Mr Barker started to understand that Mr Lee was "doing everything for the good of Singapore and Singaporeans.

"There's always a good reason behind his strict policies and he's not doing it to be funny." Over eight hours on Wednesday, sand sculptor Alvin Lee and nine others created a sand sculpture at East Coast Park which they hope would embody the spirit of Singapore's founding father.

The 3m tall and 5m wide sand sculpture depicts the Singapore skyline, a likeness of Mr Lee Kuan Yew, and part of the national pledge.

Mr Lee, a corporate trainer, said that "The challenge was trying to depict a multi-faceted person. He's very colourful, and even controversial. Everyone had an opinion."

He added that rain or shine, the sculpture should last for two to three weeks.

The sculpture can be found on the beach at East Coast Park near Carpark E2 and the cable ski lagoon. Keeping with the spirit, various garages and car accessory shops have also printed black ribbon decals for drivers to paste on their cars and motorcycles.

They are available for free and come in black or white. Mr Lee's death brought out the creative side in people, and Instagram artists channelled that creativity into nail art.

The designs range from relatively simple Singapore flags to black-and-white and full colour portaits of Mr Lee - all done on a nail-sized space. Instead of making a quick buck, a florist in Raffles Place gave away flowers to people who wanted to mourn Mr Lee - for free.

The florist refused to be named as he said he was not doing it for the publicity.

He also did not keep track of how much money he has spent since he started giving the flowers away on Monday.

"It is the least I can do," he said, "Mr Lee did so much to give us what we have today. What's a bunch of stalks to pay tribute to the man who led us here?" Like Singaporeans always do when there's a large crowd, they queued.

The line from Parliament House was so long at one point, the waiting time was eight hours and the authorities advised people not to join at the time.

But that didn't stop over 60,000 people so far from waiting patiently under the hot sun for their turn to pay their last respects.

Shops and other establishments along the line distributed water and those in line held places for others when they had to leave temporarily. While many Singaporeans wept, others coped with the loss of Mr Lee by going out to buy 4D.

Hours after Mr Lee's death was announced, the numbers 0318 (his time of death), 2303 (his date of death) and 1609 (his birth date) were sold out, as too many people had bought tickets with those numbers.