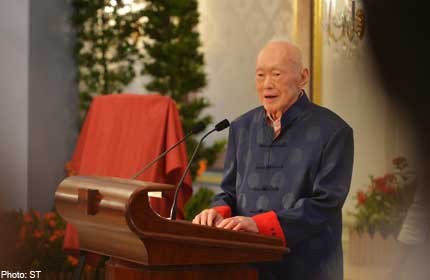 Making a 10-minute appearance and wearing a blue silk Chinese jacket at the book launch at the Istana on Tuesday, Mr Lee gave a brief 1½-minute speech.

SINGAPORE - Former prime minister Lee Kuan Yew on Tuesday described his latest book, which features his view of the world, as a "gathering of 90 years of various experiences".

It is also a "largely unvarnished account with some of the rugged edges shaved off", said Singapore's founding father, who turns 90 next month.

Appearing to be in good spirits at his book launch at the Istana, he quipped, to laughter from the audience: "I do not want to ruffle too many feathers."

The book, One Man's View Of The World, contains Mr Lee's analysis of geopolitics, the future of world powers such as China and the United States, and what lies ahead for Europe, the Middle East, and East and South-east Asia.

One chapter is devoted to discussing Singapore's future and what a two-party system would bring. Mr Lee also reflects on life and death, God and the afterlife in the 400-page book that he dedicates to his late "wife and partner Choo".

One year in the making, the book is published by the book publishing arm of Singapore Press Holdings (SPH).

They rose when the elder Mr Lee entered through a side entrance, wearing a blue silk Chinese jacket and black sneakers, and walked unaided to his seat.

In a speech, SPH chairman Lee Boon Yang said Mr Lee was "remarkably candid" in his analysis of international politics, now that he is freed from the limitations of being in the Cabinet.

"Mr Lee is an unapologetic realist in his perspective of international relations, one that eschews emotion or ideology," he added.

Mr Lee followed with a brief speech, delivering his remarks in 1½ minutes: "I won't spoil your reading of the book by telling you more about it."

The two men then unveiled a picture with the book embedded within a frame.

Rounding off his 10-minute appearance, Mr Lee shook hands with former MPs, including former minister of state Ch'ng Jit Koon, who had helped him at his Tanjong Pagar constituency.

About 20,000 copies of the book are on sale at $39.90 (including GST) at leading bookstores. It can be ordered online at www.stpressbooks.com.sg