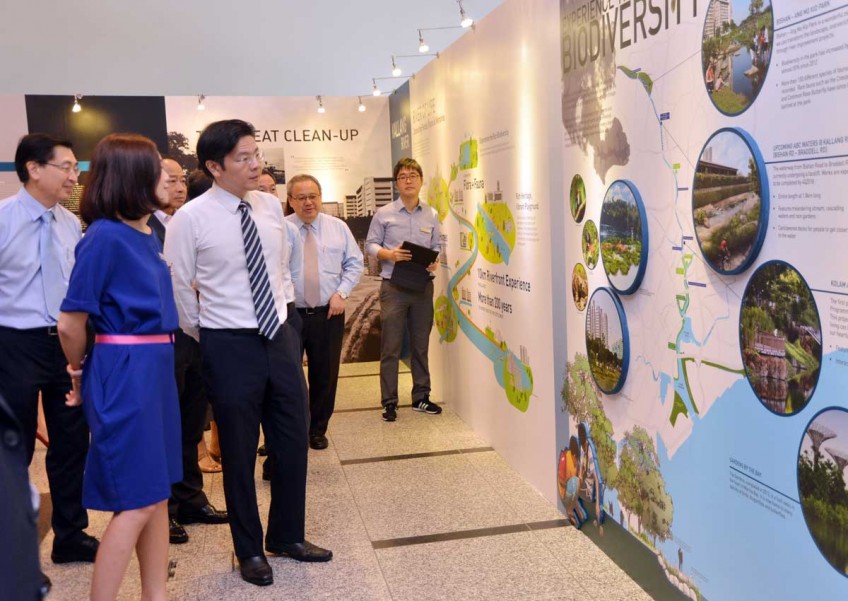 Minister for National Development Lawrence Wong and URA’s Ms Tan Siok Keng touring the A River Runs Through It exhibition after the launch.
The Straits Times

At Kallang Distripark in Geylang Bahru Road sits the dull, boxlike shape of a disused rubber factory that has been converted into a warehouse.

But a plan to breathe life into the waterway and its surroundings has been put in motion, to transform it into a place where sportsmen kayak in the nearby Kallang River and residents cycle along seamless park connectors.

The 15ha private industrial estate has been identified as a potential site, among several others, that can be redeveloped as part of the Urban Redevelopment Authority's (URA) ambitious plan to turn the area along the 10km river - almost three times longer than the iconic Singapore River - into a lifestyle hub.

The Government aims to redevelop certain plots and put in place new infrastructure so that it will one day be possible for residents to walk, jog or cycle from Lower Peirce Reservoir, where the river originates, to Gardens by the Bay and the Central Business District.

Among the URA's suggestions is building a cycling bridge that spirals over and across the Pan-Island Expressway (PIE), which would make it more convenient for cyclists and joggers to cross the PIE.

They currently have to use an overhead bridge.

It also hopes to build underpasses across Kallang Bahru Road and Upper Boon Keng Road so that people using the park connector will not need to navigate a traffic crossing.

The agency's ideas for improvements are on display at the URA Centre in Maxwell Road, in the A River Runs Through It exhibition. It was launched by Minister for National Development Lawrence Wong yesterday and will run till May 2.

The URA hopes to get public feedback through the free exhibition, which is open from 9am to 6pm on weekdays.

Consultations with residents, landowners and other stakeholders will continue for the next couple of years, though more details can be expected next year, the URA said.

The budget for the project has not been finalised.

Ms Tang Hsiao Ling, director of JTC's Land Planning Division, said it will work closely with the URA to transform Kallang Industrial Estate into a vibrant mixed-use precinct with high-rise facilities to meet the evolving needs of industry.

"The revitalisation plans for the estate are still under discussion, and could potentially include integration with future residential developments along the waterfront and parks, which will bring jobs closer to home," she said.