Chicago - A Singaporean teenager who became notorious for profanity-laced attacks on the city's late leader Lee Kuan Yew was granted asylum by a US immigration court, his attorney announced Tuesday.

Amos Yee, 18, a filmmaker turned activist who served two jail terms in Singapore for his controversial videos, was detained by US authorities when he arrived at a Chicago airport in mid-December.

An immigration appeals court in Chicago last Thursday agreed with a lower court judge's earlier decision to grant asylum, finding that Yee had a "well-founded fear of future persecution" if returned to Singapore.

"We agree with the immigration judge that the cumulative harm in this case rose to the level of persecution," the Board of Immigration Appeals said in its ruling.

Yee's attorney Sandra Grossman expected him to be released from a jail near Chicago on Tuesday. She was critical of US Immigration and Customs Enforcement (ICE) for keeping the teen imprisoned. 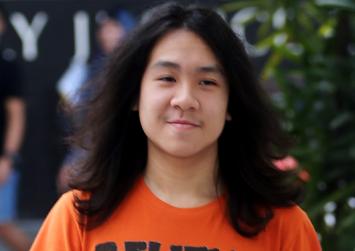 "We decry ICE's decision to detain Mr Yee, especially after his asylum case was granted and after DHS made no arguments, nor presented evidence, that Yee is a threat," Grossman said in a statement.

Yee posted an expletive-laden video in March 2015 attacking Lee amid an outpouring of grief over the founding prime minister's death that same week.

In the eight-minute video, Yee compared Lee to Jesus, saying "they are both power-hungry and malicious but deceive others into thinking they are compassionate and kind."

He was jailed for four weeks for hurting the religious feelings of Christians and for posting an obscene drawing of Lee and former British Prime Minister Margaret Thatcher.

He served 55 days, including penalties for violating bail conditions.

In September 2016, Yee was jailed for six weeks for insulting Muslims and Christians in a series of videos posted online.

The videos were watched hundreds of thousands of times before they were taken down from Yee's YouTube page.