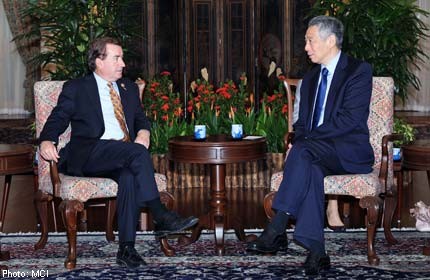 Representative Ed Royce, chairman of the House Foreign Affairs Committee, calling on Prime Minister Lee Hsien Loong on Thursday as part of a delegation from the United States House of Representatives.

During the meeting, PM Lee expressed Singapore's support for the US' renewed emphasis on Asia and welcomed its commitment to deepen its engagement of the Asia-Pacific region, according to a statement from Singapore's Ministry of Foreign Affairs.