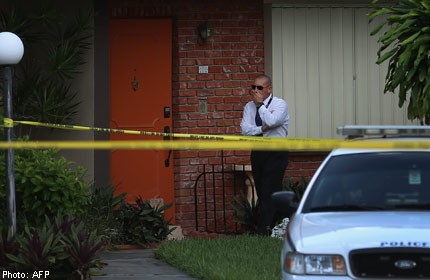 MIAMI, Florida - A man is being held in the United States after apparently gunning down his wife and posting a gruesome picture of her dead body on Facebook, authorities said Thursday.

Derek Medina, 31, was being quizzed by detectives in Miami, Florida, after turning himself in earlier Thursday following the shooting death of wife Jennifer Alfonso, 26.

But in a macabre twist, Medina had apparently posted pictures showing his slain wife's blood-soaked body on Facebook, under the caption "RIP Jennifer Alfonso," before being taken into custody.

In a status update posted shortly before the photo was uploaded, Medina revealed: "You will see me in the news."

"Im going to prison or death sentence for killing my wife love you guys miss you guys takecare Facebook people you will see me in the news," he wrote.

"My wife was punching me and I am not going to stand anymore with the abuse so I did what I did I hope u understand me."

"Officers then responded to the listed location where they found the victim deceased from apparent gunshot wounds, as well as the victim's daughter, 10, who was unharmed," a statement said.

"The motive is unknown at this time."

Medina's Facebook page showing the picture of his dead wife was up for several hours before being taken down later Thursday.

"He just said that his wife picked up a knife on him, and they had a big fight, and he shot her," Medina said.