Reuters and The Star/Asia News Network

SINGAPORE - The US State Department mistakenly made Singapore part of neighbouring Malaysia in a note issued in connection with Tuesday's (June 12) North Korea-US summit and published on its website, sparking snide comments on social media.

US President Donald Trump met North Korean leader Kim Jong Un on Tuesday for the first ever summit between leaders of the old foes, at a hotel in the city state of Singapore.

The mistake came in a transcript of a briefing US Secretary of State Mike Pompeo gave on Monday. It gave the venue as "JW Marriott, Singapore, Malaysia". The error was rectified later to remove the reference to Malaysia.

"Just 53 years and a bad break-up off." The island of Singapore was once part of Malaysia but they separated acrimoniously in 1965, clouding diplomatic and economic dealings for years.

Singapore joined Malaya and the two Borneo states of Sabah and Sarawak to form the new federation of Malaysia under the terms of the Malaysia Agreement in 1963.

However, it left in 1965 to form the independent Republic of Singapore.

Malaysia's The Star newspaper reported the error in post on its Facebook page with the title "How to offend Singaporeans and Malaysians at the same time". 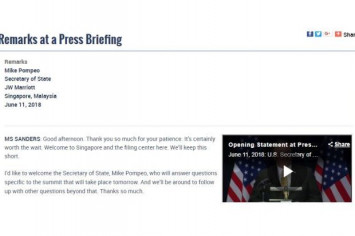 The post was shared nearly 700 times and drew almost 300 comments.

Malaysians who noticed the blunder quickly left a barrage of comments on The Star’s Facebook page, with many noting the lack of geographical knowledge by the average American.

Billon Wong said that an American had once asked him, “Which part of China is Singapore in?”

Lanny Low said that Americans have poor geographical knowledge, while Suseela Thevi Suppiah added: “To the average Americans, the world is America!”

Andrea Soon pointed out that it could be the 1Malaysia Development Berhad (1MDB) scandal which had stolen Singapore’s thunder from the eyes of the world.

“That shows that even the superpowers can sometime make this kind of mistakes. Maybe we are famous due to 1MDB until we overshadowed Singapore,” said Soon.

However, some Malaysians were not offended by the mistake, with James Kwan saying: "I don’t think I am pissed. Only hardcore Singaporeans will be.”

Sya Sha said: "Actually, it’s an insult to Singapore, but an honour to Malaysia.”