US warship returns to Singapore after generator problems at sea 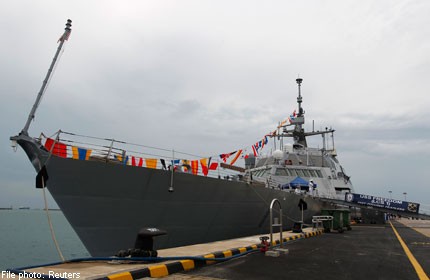 WASHINGTON - The USS Freedom, one of the US Navy's new coastal warships, returned to port in Singapore on July 20 after suffering electrical problems at sea as it was preparing for a bilateral naval exercise with Singapore, a Navy spokesman said.

The ship, built by Lockheed Martin Corp, may be able to return to sea for the at-sea portion of the exercise if repairs are done quickly, said Lieutenant Commander Clay Doss.

It is the latest in a series of problems faced by the new warship on its first major overseas deployment. Freedom left San Diego on March 1 and arrived on April 18 in Singapore, where it is due to participate in a Cooperation Afloat Readiness and Training (CARAT) exercise with the Singaporean Navy this week.

The latest incident occurred just days before a July 25 hearing by the House Armed Services Committee about the Navy's new class of Littoral Combat Ships, including Freedom, a steel monohull design, and a second model built by Austal, based on an aluminium trimaran design.

The Navy plans to spend US$34 billion (S$43.1 billion) to build 52 of the new warships, which were designed to patrol coastal waters while tackling threats like mines and enemy submarines.

The head of the House seapower subcommittee told reporters last month that he may push for funding cuts given a critical draft report by the Government Accountability Office, a congressional watchdog agency.

Doss said the ship lost propulsion briefly as its crew was preparing to take on fresh supplies by helicopter, but the ship's overall power did not go out, and the supply run was completed as planned.

Initial checks showed that one of the ship's diesel generators overheated and shut down, Doss said. He said the crew found exhaust leaks in turbochargers - which are used to increase the speed and power of the generators - in two of the generators and determined that they needed to be replaced.

The ship also had problems with its online generators that will require further troubleshooting by maintenance technicians in Singapore, Doss said.

"Despite challenges that are not uncommon for any US Navy ship on deployment, let alone a first-of-class ship that has never deployed overseas before, the Freedom crew continues to perform well as they capture valuable lessons learned," he said.

He said the Navy was confident it had the right technical and logistics resources in place in the region to address the ship's electrical problems.

Since departing for Singapore, Freedom has faced issues with its coolant system, which forced it to port for repairs, and Navy tests found vulnerabilities in its computer network.

Navy officials say they remain confident in the new class of warships which can be reconfigured for a variety of missions. They say the problems seen with Freedom and Independence so far are typical of those faced by any new ship built.

Chief of Naval Operations Admiral Jonathan Greenert told reporters on Friday the challenges faced by Freedom were similar to those seen on earlier classes of warships, including the Arleigh Burke destroyers.

"But we need to be vigilant, and we need to follow up, and we have work to do," Greenert said.