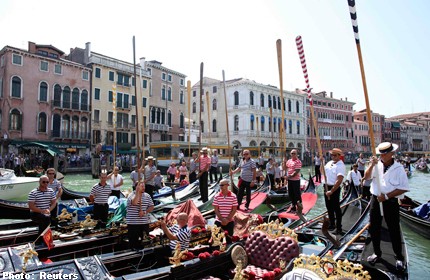 Gondoliers raise their oars as a sign of respect in front of the place near Rialto bridge where a German tourist was killed in Venice August 18, 2013.

ROME - A Venice gondolier whose boat collided with a vaporetto waterbus leaving a German tourist dead and his daughter injured was under the influence of drugs, media reports said Friday.

The driver of the vaporetto involved in the collision and those of two other vaporetti are also part of the investigation.

The accident happened on Saturday on Venice's Grand Canal near the city's famous Rialto Bridge as the public transport waterbus manoeuvred toward a stop.

The 50-year-old German man, identified as a criminal law professor from Munich, his wife and three children and the gondolier all fell into the water in the accident. Other gondoliers rushed to the rescue, taking them to the bank.

The waterbus reportedly crushed the German man, named as Joachim Reinhard Vogel, against the gondola.

His three-year-old daughter suffered a head injury and was taken to hospital in nearby Padua.

As a sign of mourning the 425 gondolas normally in service suspended their activity on Saturday.