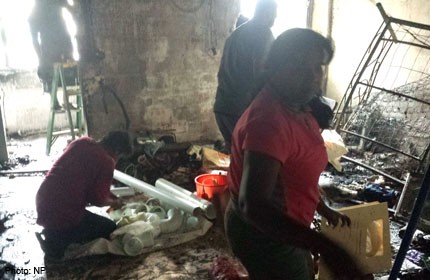 A fire at Owen Road killed an 92-year-old wheelchair-bound lady in her one-room flat on Oct 2. She was engulfed by flames while on her bed. According to a worker at the Seniors Activity Centre at the void deck, she was a smoker who always smoked while on her bed.

She was a habitual smoker who often lit up while on her bed.

Was this what caused the fire that killed the wheelchair-bound P. Lakshmi, 92, at her one-room rental flat? Residents think so.

Last Wednesday, a fire ravaged her apartment at about 5.30pm at Block 47, Owen Road. She is believed to have been on her bed at that time.

Madam Lakshmi lived there with her maid, who was not in the apartment when the fire occurred.

The maid has been asked by the police to undergo a polygraph lie detector test, reported The Straits Times on Saturday.

The Sri Lankan maid, known only as Rani, is believed to be the last person to see Madam Lakshmi alive.

Polygraph evidence remains inadmissible in court, but law enforcement agencies here have reportedly been using the instrument since 1977 to assess the credibility of witnesses and suspects.

The maid had been living with Madam Lakshmi in the flat for the past six years.

Neighbours believe Madam Lakshmi's disability might have prevented her from escaping the fire. Chinese evening daily Lianhe Wanbao previously reported that the fire was likely to have been caused by a short circuit in the flat.

But an employee of Chong Hua Tong Seniors Activity Centre (SAC), who wanted to be known as Mr Chan, said the fire might have come from her smoking habit.

When SAC members made their daily rounds around the block, Madam Lakshmi was often seen smoking while lying on her bed.

"Every time we walked past her flat, (SAC staff ) would tell her not to smoke there because it's dangerous," he said in Mandarin. "But she did it anyway. We tried to stop her, but in the end, it was her own choice."

Three neighbours we spoke to also confirmed that Madam Lakshmi liked to smoke in her flat.

The SAC is located at the void deck of the block and caters to the needs of the elderly residents there.

Mr Chan, who has worked at the SAC for nine years, said Madam Lakshmi was a member of the centre, but she was not a frequent visitor due to her disability.

He also said that most of the elderly folk in the block live alone and depend on one another for help. But help came too late that fateful evening.

When the suffocating smoke choked the common corridor on the seventh storey, Madam Lakshmi's neighbour, Mr Ong, knew he had to escape.

Mr Ong, 44, who wanted to be known only by his surname, lives three units from the flat that caught fire.

But instead of running to safety, his thoughts turned to Madam Lakshmi. He grabbed a pail and quickly filled it with water.

Then he rushed into the blaze, frantically looking for her, he said.

"But the flames were too hot and too high," he recalled. He did not manage to see anyone in the flat.

Said Mr Ong: "If only I had known (she was on the bed), I would have pulled her out to safety."

He dumped the bucket of water in the flat and escaped down the stairs.

The flames caused a power outage and elderly residents with mobility problems had to be carried down the stairs by police and Singapore Civil Defence Force rescuers.

Investigations into the cause of the fire are ongoing.