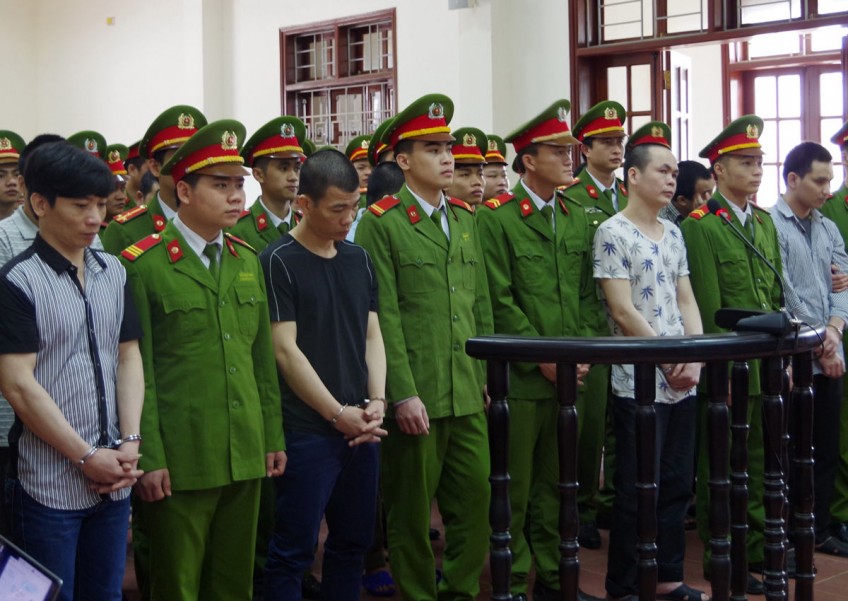 This picture taken on March 21, 2017 shows drug traffickers (in civilian clothing), flanked of policemen as they stand listening during a trial at a local people's court in the northern Vientamese province of Hoa Binh.
AFP

HANOI - Vietnam has sentenced nine drug traffickers to death for smuggling nearly half a tonne (500 kilograms) of heroin into the country from Laos, a local government report said Wednesday.

Nine others were jailed for life over the massive drug bust and "all illegal profits were seized", according to the official newspaper of the Hoa Binh provincial government.

The traffickers smuggled the drugs from neighbouring Laos for resale in China and pocketed US$670,000 (S$940,000) between 2012 and 2016, according to a separate report by the state-run Vietnam News Agency which gave no further details.

Communist Vietnam has some of the world's toughest anti-drug laws. Anyone found guilty of possessing more than 600 grams (21 ounces) of heroin, or more than 20 kilograms of opium, can face the death penalty.

The "Golden Triangle" region covering parts of Laos, Thailand and Myanmar is one of the world's top producers of opium, and heroin and other drugs are often smuggled into Vietnam from the region.

In January 2014 30 drug smugglers were sentenced to death in Vietnam's largest narcotics case, after nearly two tonnes of heroin was seized.

Governments in Southeast Asia's Mekong region have vowed to redouble efforts to tackle the rampant trade in heroin and methamphetamines.

But crackdowns are hindered by the soaring demand for drugs, corrupt officialdom and the long, porous jungle borders between the neighbours.