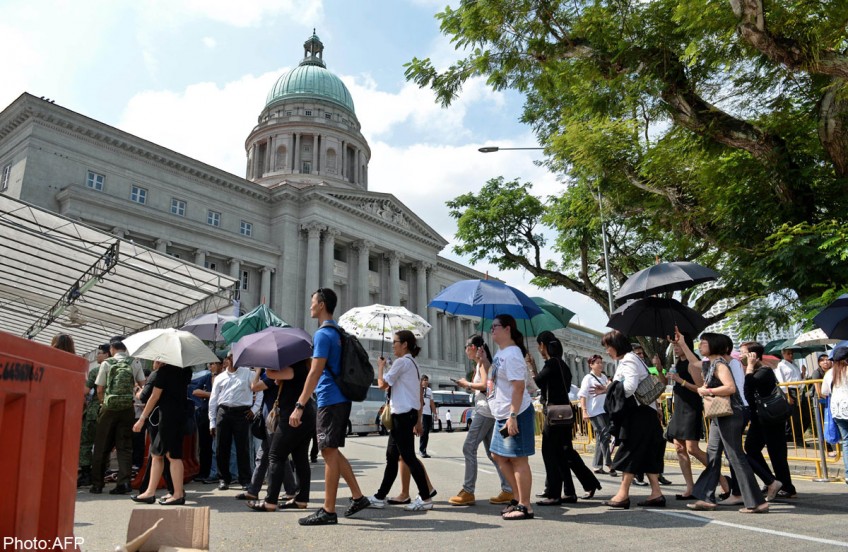 Update at 10pm: The queue for the public to pay last respects to Mr Lee Kuan Yew is 5 hours.

SINGAPORE - Expect to queue for up to 8 hours or more if you want to pay your last respects to the Singapore's first Prime Minister Mr Lee Kuan Yew, according to the latest update at 6pm.

The State Funeral Organising Committee said in a statement that members of the public are advised not to join the queue now.

As of 6pm, the cumulative number of visitors to the Lying-in-State was 124,660, while the number of condolence cards issued at Parliament House was 84,200.

Mr Lee's lying in state at Parliament House was extended to 24 hours on Wednesday due to overwhelming response and will end on Saturday at 8pm.

MRT and LRT train services will end later tonight for members of the public who wish to pay their last respects to the late Mr Lee Kuan Yew at Parliament House. A joint statement by Land Transport Authority (LTA), SBS Transit and SMRT said the last MRT trains will leave City Hall, Raffles Place and Clarke Quay stations at about 12.45am instead of the usual timing of around 11.50pm.

LRT services and 41 feeder bus services will also run for extended service hours to match the arrival of the last trains to provide connectivity between the train stations and the residential areas.