A walk to refresh the identity of a place 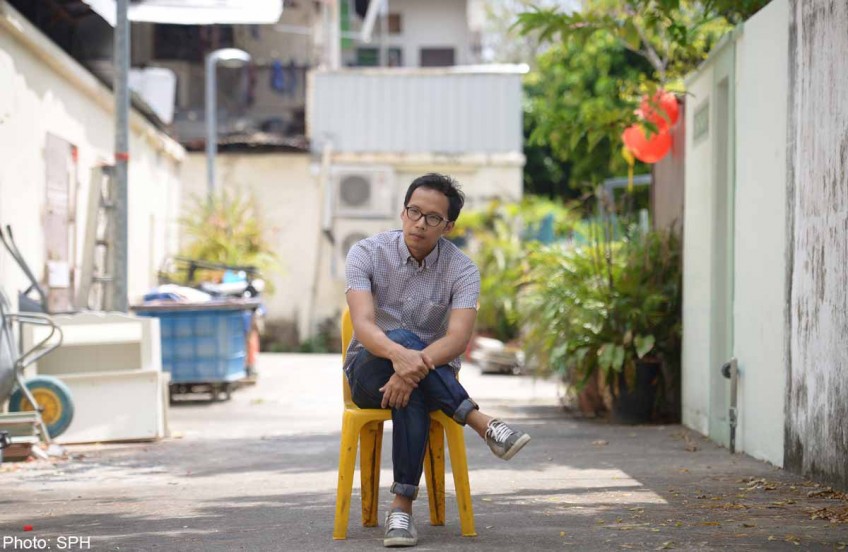 OH! Open House, an art walkabout which invites the public to enter the homes of strangers to view art, returns after a year hiatus due to lack of funds. The next tour will be in Joo Chiat and curator Alan Oei will share more during the media preview.

I grew up by Singapore's coast. Some of my earliest memories involve paddling, arms and legs splayed, through the murky, zero-visibility water along East Coast Park and then walking back home, my feet and legs encrusted with a thin layer of sand.

When we Singaporeans have our frivolous (but fun) arguments over east versus west, on an island less than a fifth the size of New York's Long Island, I still feel a strong sense of alignment with the east. I am an "Eastie" and, at every stage of my life, I have travelled further eastward, from Tanjong Rhu, to Marine Parade, to Katong, to Tanah Merah.

Over the weekend, I attended a talk by Dr Imran Tajudeen, an assistant professor from the National University of Singapore's architecture faculty, titled Mapping Histories: Cartographic Representation Of Singapore And Its Limits.

He took us through a series of maps, from the 1500s to the present day, analysing how Singapore was, and is, depicted in maps from different perspectives - some Eurocentric, others from a Bugis perspective, some focusing on its location in the sea, others on land.

Dr Imran talked about how significant Singapore's coastline was, whether in signalling the entrance to the Johor River, or indicating its own landing sites. Sometimes, Singapore is depicted as a long, thin strip; other times, conjoined with Malaysia; almost always, there is an indication of the "dangerous shoals" that lie beyond Changi, which have now been smoothened over by the ever-expanding Changi Airport.

Singapore was often identified by sea, a navigational checkpoint: there are the rusty red lateritic cliffs that used to adorn the coastal front that gave Tanah Merah its name, or Tanjong Rhu, formerly a cape jutting out along the coast full of casuarina trees, or pokok rhu in Malay.

It is with this firmly in mind that a few friends and I attended this year's edition of the OH! Open House art walkabout in Joo Chiat, yet another former coastal area before Singapore's coastline was reclaimed yet again.

This is the third edition of the popular art walk that I have attended, which was created with the vision of art and artists first invading, then finding a home in the homes of others.

This year, 12 artists set out to map the cultural history and terrain of Joo Chiat through their work, curated by artist Alan Oei. The result is a quiet, leisurely meditation on Singapore's evolution, one that puts the artwork in the spotlight, but does not forget the neighbourhood that brings it all together.

We clambered around in a bright orange lifeboat generously loaned by a Joo Chiat resident, filled with and surrounded by fragments of the lives of others: an earring, a typewriter, a gold cheongsam, a "banana banknote".

We slipped through back alleys, the "no man's land" of the art walk's sub-heading, unnamed and unmarked arteries to nip from one street to the next. We entered an old shophouse from the back and exited through the front, our pathway strewn with roses made from plastic bags, a tongue-in-cheek take on SG50 kitsch by Guo Yixiu.

The artwork isn't quite as showy as the Marine Parade or Tiong Bahru instalments, but it is full of quietly dramatic moments: a resident talks about a surreal encounter with a working girl after a vice raid in the area, set against a series of photographs by award-winning photographer Sean Lee in character as Shauna, a ladyboy working in the red-light district of Cambodia's Sieam Reap.

There is a quiet but powerful installation in the Fragrance Hotel next door by Mark Thia and Mike Chang, where visits to anonymous rooms are deeply revelatory.

It captures the delightful contradictions of the area, the sleaze elbowing up against the slick new conservation developments, shophouse fronts hiding fashionable private residential enclaves.

Tanah Merah's red cliffs no longer stand out to ships passing through the South China Sea. There are no more lethal shoals to navigate beyond Changi Point. And Joo Chiat is no longer by the sea. But there is the rubbing up of the old against the new, creating both friction and possibilities.

So often, I find, we live in a place that is like every other place in Singapore, our anonymous HDB flats, practical and familiar, covering so much of this island's available space. It is the neighbourhoods like Joo Chiat that we crave, ones that defy both gentrification and co-option.

We have almost forgotten their previous names, why Joo Chiat was named Joo Chiat in the first place (after Chew Joo Chiat, a poor immigrant turned wealthy philanthropist), and their prominent residents are also fading from memory - the studio of the late sculptor Ng Eng Teng along Joo Chiat Place is now demolished.

We asked a few tour guides if they knew where the coastline had been; only long-time resident Mr S.S. Tan, who is in his 70s, lives in Koon Seng Road and had opened his home to an art installation, could immediately point it out.

I am glad that we can celebrate these spaces and give them new meanings without forgetting the old.

Often, the artwork was participative - we wrote names and messages on a tall bicycle, unrolled pieces of parchment to read and sat on a creased queen-sized hotel bed. During a fringe performance, an elderly man on a rickshaw cycled past what would likely have been an empty back alley and was surprised by performer Chloe Chua contorting under the amber lamplight, with Leslie Tan of the T'ang Quartet on cello, surrounded by an unexpected crowd of at least a hundred spectators.

So much of Singapore has been "reclaimed", filled in and filled up with land. Dr Imran spoke of how our creased, jagged shores have increasingly become straight, nondescript lines.

Open House is a different sort of reclamation: of Singapore's emotional toponymics, of its residents' personal histories, both old and new.