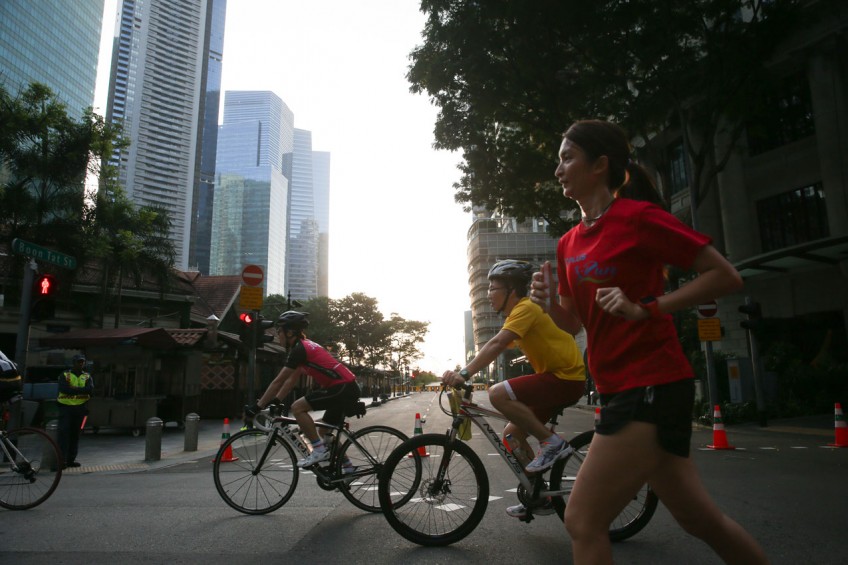 Cities which want to become more conducive for walking and cycling should prioritise the needs of cyclists and pedestrians above those of motorists.
The Straits Times

Cities which are looking to go car-lite need to put a stop to cheap and easy parking.

This means parking provisions need to be crimped, and parking policy and management should also be housed under a single government authority.

This was one of 10 key recommendations from a research project on how cities can become car-lite and reduce their reliance on private cars by government think-tank, the Centre for Liveable Cities (CLC), and the Urban Land Institute (ULI), a research organisation based in the United States.

The study, titled Creating Liveable Cities Through Car-lite Urban Mobility, began at the start of this year and will be completed in October. Yesterday, preliminary findings were presented at the World Cities Summit at the Marina Bay Sands Convention Centre.

"Even with excellent access to public transport, workplaces that provide ample parking spaces at affordable rates are likely to prompt both staff and visitors to drive," said the report, adding that poor parking policies can undermine efforts to go car-lite.

This recommendation comes as the Government announced last month an upcoming hike in public parking rates from December.

The study aims to come up with practical ideas that governments can use to make their cities car-lite.

Other key ideas include designing streets to prioritise the needs of pedestrians - which could mean taking away space for cars; expanding public transport or providing options such as bicycle-sharing for the first and last mile of trips; and ensuring that government agencies are aligned in their vision to reduce reliance on the private car.

"Alignment of vision across the board is critical. Cities need to ensure that transport planning is not treated in isolation from other related urban policies," said the report.

This is the third joint study by the CLC and ULI. They had previously published a report on active mobility in Singapore and another on urban development.

Responding to the study's findings, some members of an expert panel at yesterday's event said Singapore needed to be bolder in pushing through car-lite policies.

Mr Gabe Klein, former transportation chief of Chicago and Washington DC, said Singapore was good at big infrastructure projects, but smaller changes, such as taking road space away from cars, have proven challenging.

"For some things, you just have to do it and you have to explain to the public and stakeholders," he said.

CLC director Hee Limin said there would be more people using alternative modes of transport on the sidewalks, instead of driving cars, in the future. "We need to anticipate this and create more space, and one of the ways is to reclaim space from cars," she said.

Yesterday's study was not the only one launched by CLC at the summit. Today, it is launching another publication on walking and cycling in collaboration with the Seoul Institute.

Among other things, the study suggests that cities which want to become more conducive for walking and cycling should prioritise the needs of cyclists and pedestrians above those of motorists.