Wanted: Maid or master of all trades? 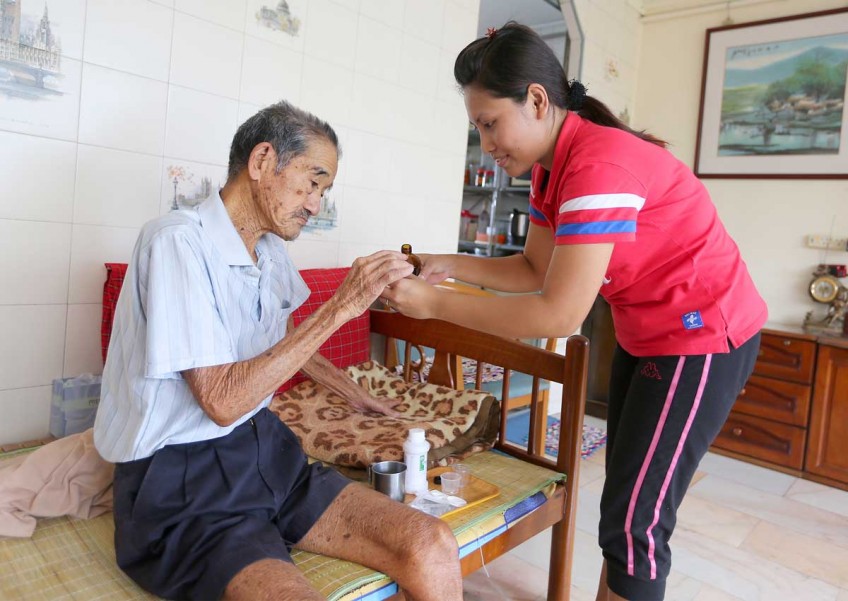 Four decades ago, there were 5,000 foreign women working in Singapore as domestic help - cooking, cleaning and minding children. Today, there are 237,100.

As their numbers swelled, so have their duties. Maids today are employed for roles as varied as chauffering their employers to tutoring children or even illegally working in businesses. As Singapore's population ages, they are increasingly hired to care for the elderly or the disabled, and perform medical duties.

Indonesian Kusrini Caslan Arja, 37, for example, had to suction phlegm from the windpipe of her disabled four-year-old charge.

While doing so last November, Kusrini got a suction cap lodged in his throat. On Monday, she pleaded guilty to ill-treating the boy.

Her case has been adjourned to March 23, but District Judge Low Wee Ping, in unexpectedly sharp comments, pointed to the system as one possible culprit.

Singaporeans use maids "too generally", he said, adding that "it may be the system's fault" for allowing domestic workers to perform medical care even though they are not trained to. "We employ domestic maids to be car washers, gardeners, plumbers, nurses, when they should not. When they do something wrong, we point fault at them."

Maids' job scopes have indeed expanded, said migrant-workers groups. Yet, they are not adequately trained or compensated for the extra work they are doing, they say.

"Maids are not masters of all trades," said Mr Yeo Guat Kwang, chairman of the Centre for Domestic Employees. "Employers should be cognisant that some of these tasks should be done by a trained professional."

Mr John Gee, executive committee member at Transient Workers Count Too (TWC2) said: "Training centres in workers' countries of origin normally train women to be general purpose domestic workers. We should be aiming to recruit specialised care workers... with other duties limited and with set hours and decent salaries."

The reason why Singaporeans resort to maids is clear: It is far cheaper than to hire professional nurses.

For instance, hiring a maid costs about $600 a month, as opposed to the $14 to $65 per hour it costs, depending on subsidy amounts, to hire a nurse to come to one's home.

Mr Jolovan Wham, acting executive director for Humanitarian Organisation for Migration Economics (Home), noted that there are also no rules against maids taking on additional roles.

Experts said one solution could be in defining their responsibilities more clearly, especially in their employment contracts. But Mr Gee said that is provided "the workers really have the power to insist on the terms, including having time off and access to a phone so that they can seek help or complain if the terms are violated".

In response to queries from The Sunday Times, the Manpower Ministry said employers can send their domestic workers for relevant caregiver training. This includes approved training courses under the Agency for Integrated Care's (AIC) Caregivers Training Grant which provides an annual $200 subsidy for caregivers of seniors and the disabled. This includes foreign domestic workers. Employers can also hire domestic helpers who have been trained by the AIC.

But Association of Employment Agencies (Singapore) president K. Jayaprema said: "I'm not sure if it is enough to just go through a two-day or a one-week course." It is not just physical skills that are needed, but also mental resilience when caring for an elderly person with dementia or a disabled child who needs constant attention, she said.

Mr Wham said that each week, about three to five domestic workers caring for the elderly or the disabled come to Home for help. "They are all very tired and exhausted when they come to us."

Ms Jayaprema said there are maids with caregiving certificates and that agencies do recommend those. They would cost $650 to $1,000 a month, compared with regular maids who command $550.

But many families are unwilling to pay the higher fees.

Mr Gee added: "Social attitudes will need to change: those who have relatives who need care need to be convinced of the advantages of hiring dedicated care workers."

Every day, Indonesian maid Ema Yulia, 28, carefully monitors Mr Soh Bock Hiang's many pills of various colours. There are six different ones that the 84-year-old has to take five times a day.

Meanwhile, his wife Huan Soo Kiaw's back hurts. She cooks and cleans and raised 10 children. But now, at 82, she has finally agreed to their children's pleas to have a helper at home.

Madam Huan said: "My children kept wanting to get me a helper, but I never wanted one. But now he's sick I've no choice."

Ms Ema had attended a basic eldercare course at the Ang Mo Kio - Thye Hua Kwan Hospital and knows how to safely transfer an old person from bed to wheelchair, shower him and feed him, among other skills. She is one of the maids from a scheme that has them trained in eldercare before they are matched with a family.

Every weekday afternoon, she would help a four-year-old with his maths, reading and writing, art and motor skills.

Some days, she would even use Japanese teaching methods called Herugu and Shichida.

But Miss Margie Laguit, 36, is no superstar tutor. She did not even finish primary school in the Philippines.

"They said it is part of my work," she said, of her employers. She started working for them in December 2015.

According to the timetables Ms Laguit showed The Sunday Times, she would be out of bed by 5.45am to get the two children ready for school. She would then clean the four-room HDB flat and cook. But the household chores did not bother her.

"Just don't force me to teach the kids. Mathematics and English I can do, but Shichida, I cannot do."

Miss Laguit asked to be sent home multiple times, but said her employers kept delaying. Frustrated, she ran away from her employers last month. "I just want to go home," she said.

ASKED TO WORK AT EMPLOYER'S RESTAURANT TOO

All was well when Ms Tusriyati, 31, joined her fifth employer last June.

But, in December, came an odd request. Ms Tusriyati's employer took her to his new restaurant and asked her to clean the place. Soon, she was working there full time, serving food and handling the cash register like a regular employee. This continued till she ran away on Feb 23.

"I was scared the Government (would) catch me. I know my work permit is only for working in the home," she said.

Foreigners employed as domestic workers can only " perform household and domestic duties at the residential address as stated in the work permit", states the Employment of Foreign Manpower Act.

Friendly patrons of the restaurant would make conversation and she worried that she would let the truth slip. "My employer said, don't tell anyone you are a maid. Say you're married to a Singaporean," she said.

Ms Tusriyati, who is at a shelter now, said that the work at home was also tough. Her employers, a couple in their 30s, were particular about cleanliness. The car had to be washed daily, the floors swept, mopped and vacuumed twice a day.