Watch out! Sharp rise in number of road potholes after heavy rains

SINGAPORE - Road potholes have proliferated across the island after heavy rains in the last several weeks, raising concern among motorists and cyclists alike.

Senior Parliamentary Secretary for Transport Baey Yam Keng on Friday (Jan 15) told The Straits Times he is aware of the situation: "The rains this year have been heavier and more protracted. We're seeing four times more potholes than usual."

He explained that with persistent rain, water seeps into the ground, softens the soil, and the tarmac above gives way when vehicles go over them.

The Land Transport Authority (LTA) is combing the roads and making repairs as soon as possible, he said. But because of the pandemic, contractors' access to workers has been affected, he noted.

Given the size of the road network, he urged road users to be on the lookout and alert the authorities if they come across a pothole - either on the OneService app or MyTransport app.

Mr Toh added that while it is usual to see more potholes after a rainy spell, "the number and size of potholes have gone up this year". 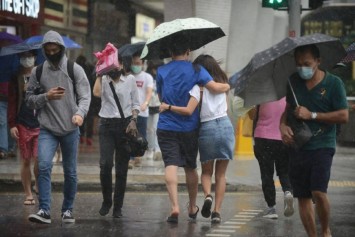 Another cyclist, Imran Talib, 46, said he tripped over a pothole in Old Airport Road last week and fractured a rib. "It was covered by a puddle," the regional sales manager said. "I didn't see it till it was too late."

He went to a hospital and an X-ray revealed a hairline fracture. "I'm okay. Still mobile," he said.

Mr Lee Teck Send was not so fortunate. Last August, he rode over a pothole, fell, sustained brain injuries, and died in hospital days later - according to Facebook posts by his family and fellow riders. While his case was not from the recent spate, Mr Toh said it highlighted the dangers of potholes.

Mr Bernard Tay, president of the Singapore Road Safety Council, said the LTA usually aims to repair potholes within 24 hours. But with the persistent rain, work could not be carried out as quickly, he added.

Mr Tay pointed out that two-wheelers - like cyclists and motorcyclists - are more vulnerable, and riders should take precautions such as wearing proper gear and riding at lower speeds.

He also advised motorists to ensure their vehicle are in good condition, with more attention paid to windscreen wipers, headlights, tyres and brakes.

Freelance motoring writer Wong Kai Yi, 31, said: "As both a driver and cyclist, these potholes are no mere eyesores - they affect both traffic and safety. Several times, I had to avoid potholes large enough to swallow a bicycle wheel."

The communication manager added: "I notice some motorists, perhaps those who are familiar with the deteriorating road conditions, keeping to one side of the lane where they can then avoid all the potholes. That means they sometimes straddle lane markings, and some cars on the neighbouring lane end up having to swerve around them, creating a nuisance on the road.'

He added that some areas which have been repatched appear to have been done so in a haphazard manner, resulting in an uneven and uncomfortable road surface.

Read Also
This made my day: Cabby goes out of his way to help mum of 3 despite heavy rain 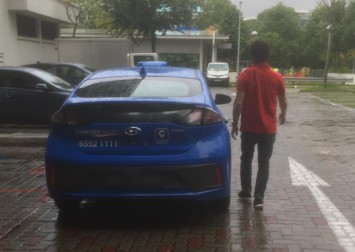 The authorities should aim to prioritise patching potholes, and perhaps "take proactive action to shore up road conditions," he said.

Meanwhile, a Gojek community group started listing locations of potholes on Facebook on Friday. Within the first three hours, more than 20 sites have been listed.

An LTA spokesman said: "We would like to seek commuters and motorists' understanding as we work with our contractors to expedite the repair works.