'We cannot ever drop the ball' 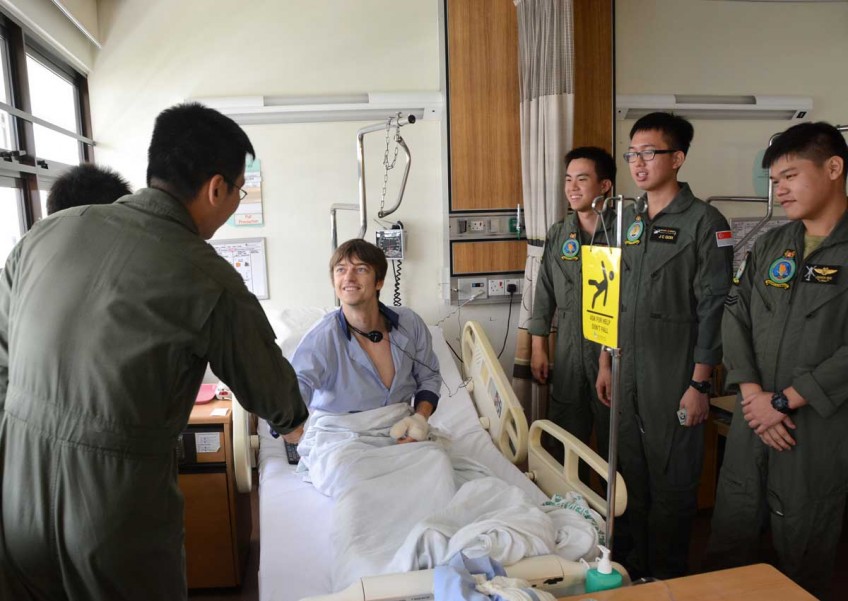 He sustained fractures and deep cuts on both his arms in an accident aboard a container ship in the South China Sea, about 260km to the north-east of Singapore.

The heavy bleeding from his cuts made him lose about two litres of blood, putting him in a life-threatening situation.

Mr Andrej Zaslavec, a Lithuanian second officer aboard the container ship managed by Uniteam Marine, needed to get to a hospital quickly.

That was the cue for a Republic of Singapore Air Force (RSAF) crew to spring into action. And how the team responded could be a matter of life and death for Mr Zaslavec.

As its location was within Singapore's search-and-rescue region, the ship had contacted the Singapore Rescue Co-ordination Centre which led to the activation of the crew at Sembawang Air Base at 12.27pm on April 13.

The mission commander, Captain Nicholas Ong, 36, told The New Paper on Wednesday that the six crew members on standby - two pilots, two aircrew, a doctor and a medic - instantly dropped whatever they were doing when they heard the announcement.

"Timing was crucial. I just focused on getting to the victim as fast as possible so we wouldn't delay his medical treatment," said Capt Ong, who has been involved in four evacuations since 2007.

"We already had the exact coordinates after establishing communication with the captain of the ship. So we didn't waste any precious time."

The medical officer, Capt (Doctor) Shawn Lim, 27, agreed that time was of the essence and the focus was to be airborne in 15 minutes despite the medical centre being a five-minute drive away.

"We were a little nervous but because of the realistic training that we get, we were mentally prepared for such situations. It was just a matter of executing it," said Capt (Dr) Lim.

When their Super Puma helicopter was approaching the ship, the weather was quite hazy and visibility was poor. There was also no distinct horizon to act as a guide, said Capt Ong.

Then the rescuers realised the container ship did not have a helipad. Mr Zaslavec would have to be evacuated using a hoist, a device that lifts or lowers a load.

"The area to pick up the victim was very small, it was the size of two parking lots," said Capt Ong.

He hovered the Super Puma about 150 feet above the water while Second Warrant Officer Lim Chee Kiong, 43, operated the hoist to lower Capt (Dr) Lim and 3rd Sgt See to the anchored ship.

The ship captain had told the team that Mr Zaslavec was on the bridge, so Capt (Dr) Lim and 3rd Sgt See knew where to go once they landed on the ship.

"I saw him lying on a platform with both his arms bandaged. The bandages were soaked in blood but he was conscious," said Capt (Dr) Lim.

"The crew members told me that the victim had lost about two litres of blood, which was life-threatening. I knew he had to be rushed to the hospital immediately." Within 15 minutes, Mr Zaslavec was secured on a stretcher and hoisted up with 3rd Sgt See. Capt (Dr) Lim followed suit.

In the helicopter, Capt (Dr) Lim and Cpl Goh kept Mr Zaslavec stable by infusing intravenous fluids and monitored his condition closely throughout the flight to Singapore General Hospital, where he was warded.

He was discharged on April 14 after recovering from his injuries.

The rescue, which was shared on the RSAF's Facebook page on April 14, got more than 220 likes and many comments praising their work.

In the Facebook post, Mr Zaslavec was quoted to have said: "The crew was very quick and very nice. A big thank you for saving my life." The crew was also heartened that the rescue was successful.

When TNP contacted Uniteam Marine yesterday, a representative said Mr Zaslavec had flown home to Lithuania the day after his discharge.

Capt Ong said such rescue operations, most commonly to evacuate people who are injured on board ships, happen once or twice a month.

Capt (Dr) Lim said: "Search-and-rescue missions are one of the things that we hold in high regard.

"And in the back of our minds, we know that we cannot ever drop the ball.

"We always keep it at a high priority because we know this is our commitment to Singaporeans as well as people in the vicinity of our country."

Losing 2L of blood can be deadly

"The estimated volume of blood in a human body is about 5 litres. So losing 2 litres of blood, which is about 40 per cent, can be deadly," he added.

"As part of the immune system, blood helps fight diseases and has a self-repair function to prevent further blood loss. But when you sustain such an extensive injury, the healing process will be slower compared to the rate of the blood loss which could also be fatal."

Dr Yeo also said that significant blood loss requires urgent medical attention, usually in a hospital where the bleeding can be stopped.

"It also depends on the severity of the injury and the amount of blood loss during a short period of time, but most patients will need immediate blood transfusion to replace the blood and fluid in their body."

A crew member who fell ill on a commercial vessel 160km off the coast of Singapore was evacuated by the RSAF.

The crew member, who could have suffered a stroke, was taken to SGH in a helicopter and was said to be in a stable condition.

A 23-second video of the rescue was posted on the RSAF's Facebook page.

Australian Lesley Jenkins, 71, was rescued by the RSAF when she suffered cancer-related complications on board a cruise ship that was 150 nautical miles (278km) from Singapore.

Doctors on board the cruise ship treated her, but Madam Jenkins required extensive medical treatment urgently. She had to be carefully winched from the vessel and flown in a Super Puma helicopter to SGH.

A Super Puma was rushed out to sea to help national serviceman Ng Chang Kang get to his dying three-month-old baby.

Mr Ng, a 2nd Sergeant and navy technician, was on Pulau Tioman on reservist training. His superiors on board the RSS Endeavour were alerted and a navy speedboat rushed Mr Ng from Tioman to the Endeavour, a navy landing ship.

The Super Puma picked Mr Ng up from the deck of the Endeavour and rushed him to SGH.

This article was first published on April 22, 2016.
Get The New Paper for more stories.