We were not burning textbooks, says Kiss92 DJ 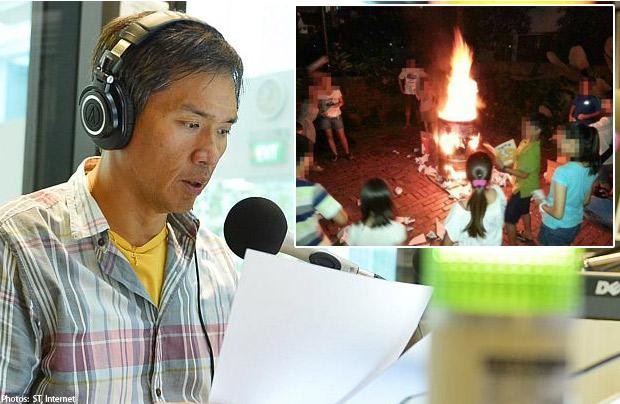 The parent who organised the burning of homework to celebrate the end of his son's Primary School Leaving Examination (PSLE) clarified on Tuesday that textbooks had not been set on fire.

"We were not burning textbooks, but only assessment papers and schoolwork, as they were the sources of stress.It wasn't because we're against learning, or that we are against knowledge or books," said Kiss92 DJ Arnold Gay.

He has come under fire for organising the event for a group of 20 students and several of their parents last Saturday on a driveway outside his Katong home.

A photo showing them throwing worksheets into a lighted metal drum, with crumpled sheets of paper strewn around it, has been widely distributed online, attracting a host of reactions, most of them critical. Many netizens said the act insults learning and speaks badly of the education system here.

"It was meant to be cathartic and fun, for the kids to symbolically leave something stressful behind and mark a new beginning," said Mr Gay, 46, adding that he was "surprised" by the reactions. "People are reading too much into this. I wasn't trying to make any statement and the kids were really happy getting rid of their work."

But parents and netizens said Mr Gay, whose son finished the PSLE last Tuesday, was missing the point. It is not so much what was burnt but the act of burning that raised concern, they said.

"I wouldn't burn test papers and worksheets. I would just throw them into the recycling bin," said housewife Priscilla Lee, 40, whose daughter also sat this year's PSLE. Private tutor Sherley Servos, 42, whose son also took the exam recently, said: "I thought it was just ridiculous. Assessment books can be reused - for instance, you can cover the answers and use the questions."

The event was also criticised by readers on The Straits Times' Facebook page, gathering nearly 200 comments as of yesterday. Said Mr Jeremy Shiu: "My parents and my mentors taught me to respect books and writings... They are a sacred part of civilisation. They're the hard work of many people and have the ability to transfer knowledge."

Another reader, Mr Edwin Kang, added: "The parents should know better than to expose their kids to acts (of) arson to (relieve) stress."

On Monday , Mr Gay put up another photo of the event on Kiss92's official Facebook page, along with the post: "Bye bye PSLE! This is how Arnold spent part of his weekend - helping his son and his pals burn their PSLE papers and homework away!"

A handful of comments applauded Mr Gay's celebration. Setting up a "bonfire" just to burn schoolwork, they said, showed how much pent-up frustration there is with Singapore's education system. Mr Russel Low, who posted on the radio station's Facebook page, said it is "a way for the kids to finally put behind them their primary education and to look forward to the next phase of their education. It's also a great opportunity for parents to bond with the kids."