Wedding gatecrashes: How much do you really need to spend? 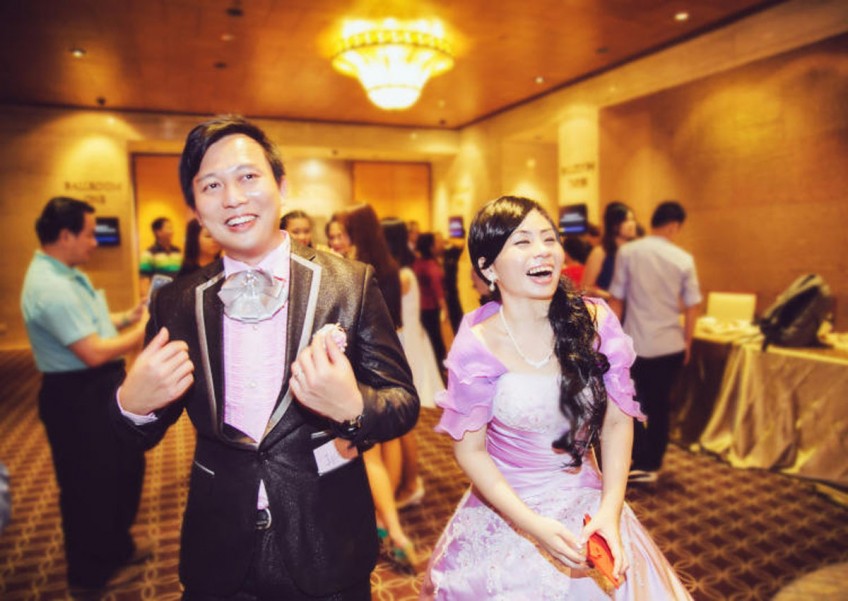 It's not uncommon knowledge that banquets and weddings in Singapore costs a bomb. You'd think with all our issues with ageing populations and a decreasing birthrate, someone would care enough to start lowering prices.

But nope, apart from the perfect world I've formed in my dreams every night, everything costs money. In fact, did you know some traditions cost money too? Most Chinese couples tend to underestimate the costs involved in a gatecrash.

Here's the breakdown so you don't need to kan cheong spider when your time comes:

The "guo da li" is usually done on an auspicious date between 3 to 30 days before your actual wedding. The groom, together with an elderly relative (usually either just his mom or dad), will bring a host of gifts to the bride's side to symbolise his sincerity towards marrying and providing her a good life.

Different dialects need different items, but they revolve around a variant of the below:

If you're thinking DIYing these would be cheaper, you're probably right. Especially with the help of Taobao these days. However, because of the need for guidance on Chinese customs, most couples would usually opt for the shorter route and just purchase them in a set anyway.

These sets can be purchased at specialised "guo da li" shops in Singapore along the Chinatown stretch. Ranging anywhere between $150 to $250. Besides the above sets, you'll also have to purchase some F&B products, jewellery, and fork out the "bride price".

The pig, the booze, and the oranges…

Most betrothal traditions would require some form of pork, alcohol and oranges. For my sister's wedding last year, we had a roasted pig ordered in from a hawker selling roasted meats for $188.

You can also utilise those saved up bottles of unopened Martell from your overseas trips, or buy some from your nearest FairPrice at $100 per bottle. Oranges no need to say, few dollars only lah.

Of course, the betrothal packages do not include the money that parents of the groom would have to give the bride's side (the bride price/"ping jin").

These are usually given in variants of the Chinese auspicious number 8 and can be anywhere between $188, $288, $1,888, $8,888… Depending on how rich the groom's side is lah. Or to be harsh, depending on how much the bride is worth (hahahaha, okay I'm totally kidding!).

There's also the 4 or 5-piece gold ("si/wu dian jin") and/or the dragon phoenix bangles that the groom's side will have to buy. And regardless of what both sets of in-laws agree on… that'll be another $5,000 gone. MINIMUM.

After receiving the betrothal gifts, the bride's parents would usually "show" their acceptance of the marriage and return a portion of the gifts received, together with other additional items.

Like the betrothal set, you can either buy these extra items individually, or get them in a package at the same shops along Chinatown. The packages I've seen online range anywhere between $60 for a simple set, to $190 for the full package.

In addition, you'll also need to buy the following:

A quick check online shows we can get a bottle of orange juice for $2.75. So allotting a budget of $8 for this would be more than sufficient.

We're fortunate enough these days to have affordable bedsheets in softer materials; Ikea offers decent queen-size sets at $199 each. It's the same with clothes and accessories, $150 set aside would be more than enough…Just be sure not to get anything black.

For this, expect the bride or her parents to be set back by a total of $745.

When you see couples with so many bridesmaids and brothers, you'd think "Wah! Very shiok hor. So many people help them with their wedding."

In reality, the more bridesmaids and brothers you have, the more expenses you incur.

Bridesmaids and brothers are usually appointed in the same numbers since you'd need your wedding party to have some sort of symmetry for photographic purposes. So if the bride wants 6 bridesmaids, 6 brothers should be appointed too.

The good side to this is that there's no hard rule to how many "sisters" or "brothers" you should have. Even if you have just 2 for each party, it's still sufficient.

Usually these bridal parties have allotted dress codes. With Taobao and blogshops and most (yes, most) men having almost identical wardrobes, we can now thank the heavens for cheaper bridal party clothes.

But even if you were just buying dresses for bridesmaids, they can set you back up to $50 per girl. Depending on the standard of quality you're willing to settle for.

Of course, with all the help you're getting, it's only nice to give them a red packet as a form of appreciation to their contributions.

These days, couples usually prepare a standard $88-$288 for each person… Unless the bridesmaids manage to get their way during the games section and weasel more "angbao" out of the groom's party.

Which brings us to the next point…

I like to call it that at least, 'cause the games will "tempt" your tastebuds (hurhur).

But okay, there's no sure way to give you a digit here. But here's a sample of how much expenses can be incurred during the gatecrashing games.

Food ingredients for the 4 tastings:

Factoring in the above plus the amount needed for the props during the additional tekan sessions such as your tutu skirts, bras, fairy wands, card board decorations, etc. It's safe to say the games and tasting sessions will cost you a rough estimate of $100.

So… How much do I need to prepare?

If you were to add up the sections that I've presented earlier, it'll amount up to a $6,941 for a basic gatecrash with 2 bridesmaids, and up to $28,361 if you choose to have everything.

But before your run off in a panic, you should remember that this amount is often shared between both the couple and their in-laws. And the amount is calculated on the assumption that all traditional components are included.

You can always choose to do away with some of them. Whatever floats your boat.