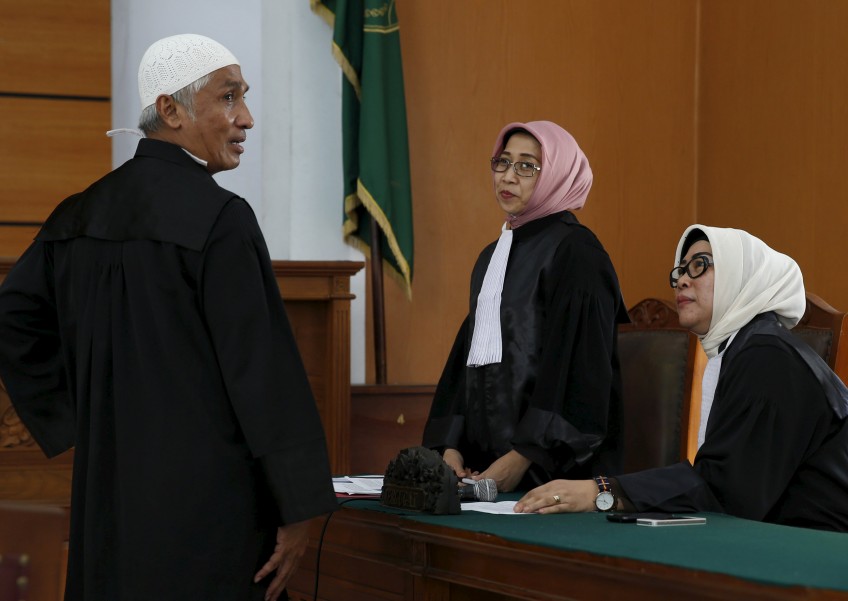 Achmad Midan (L), a lawyer of convicted Indonesia's muslim cleric Abu Bakar Bashir, talks with prosecutors before a hearing for Bashir's appeal against a 15-year jail term, at a district court in South Jakarta, December 1, 2015.
Reuters

The West Jakarta Prosecutors Office will continue to seek the maximum sentence of death for big players in the drug trafficking world.

The West Jakarta Prosecutors Office head Reda Manthovani said on Tuesday that last year, his office handled 721 drug cases and sought the death penalty for 25 suspects, particularly for those who were involved in the trafficking of large amounts of narcotics.

According to Reda, his office would seek the death penalty for at least 11 "big drugs suspects," this year. "The people have sent tons of narcotics to Indonesia. They did not merely sell narcotics here, but even established a drug factory," Reda said during a press conference.

Many human rights activists have complained about his firmness against drugs suspects, Reda said, adding that he believed that firm action against the drugs traffickers should be implemented so as to protect young people from drugs.

"Just imagine if one of the members of your family became a narcotics user," said Reda. "China is a great country, but they were defeated because of opium. We don't want to be like that," Reda said, citing the history of China, a nation that was defeated by invaders during the opium war.

He said that the West Jakarta Prosecutors Office had demanded the death penalty for Iwan Setiawan, who is accused of possessing 450 kilograms of marijuana, but the West Jakarta District Court chose to punish him with a life sentence. "We will file an appeal," Reda said.