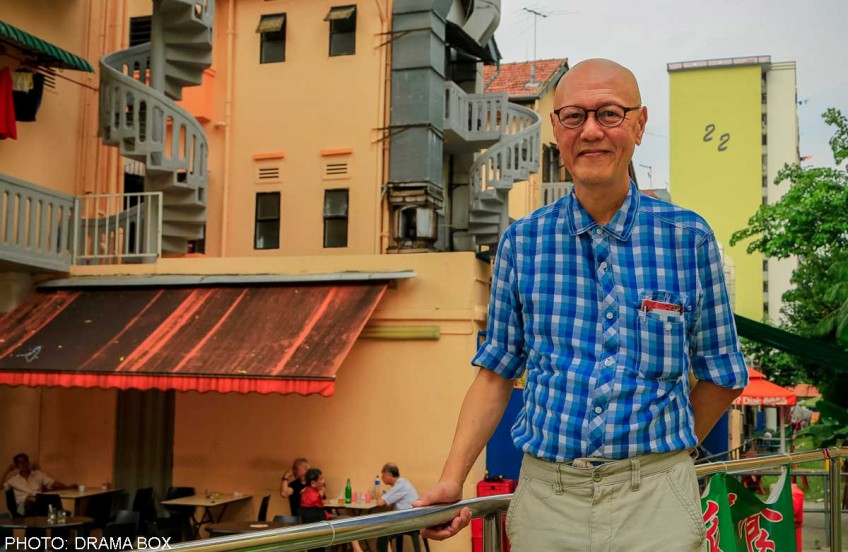 Retiree James Seah standing in front of the MCA (Malayan Chinese Association) shophouses, the only building structures that survived the 1961 Bukit Ho Swee fire. He will be leading heritage trails in the area.

Heritage trails and a performance tour of the former squatter area explore issues of resettlement Retiree James Seah, 65, still remembers the thick smell of burning oil and the sounds of explosions as Bukit Ho Swee burnt to the ground in 1961.

He says: "I was not scared. In fact, I was very excited, wondering what was happening. I was 13 years old and I had never seen a fire before."

More than 50 years later, he will be conducting a heritage tour of his former neighbourhood as part of theatre company Drama Box's community project, IgnorLAND Of Its Time.

On Aug 2, he will point out landmarks and show participants photographs of what the estate looked like when it was still a squatter settlement, before the introduction of public housing in the form of HDB flats. The fire destroyed 2,200 attap houses and displaced 16,000 people, including Mr Seah.

Drama Box associate artistic director Koh Hui Ling, 35, says it was keen to explore the idea of resettlement and redevelopment - issues that space-starved Singapore often wrestles with - for this third edition of its IgnorLAND series.

Apart from Mr Seah's heritage trails, there will also be a performance tour to introduce participants to the history of Bukit Ho Swee and the personal stories of its residents. It will run from July 24 to Aug 1.

Aptly enough, Singapore playwright Jean Tay has written the script for this performance tour. She is best known for her critically acclaimed play Boom (2008), an O-level literature text which looks at resettlement and redevelopment. Boom revolves around an elderly woman (actress Fanny Kee, who is also part of the IgnorLAND performance tour) and her real estate agent son, who are wrestling with the potential en bloc sale of their long-time home.

This is the first time that Drama Box will be involving community performers from the neighbourhood in its IgnorLAND series. Ms Koh spent a year building relationships in Bukit Ho Swee connecting with social service organisations and residents who, in turn, helped to connect Drama Box with the different authorities to get clearance to use venues, such as hawker centres, as part of the shows.

The community performers include Mr Yap Ah Leck, 68, a retired civil servant-turned-cobbler who moved to Bukit Ho Swee five years ago; grandmother Alison Koh, in her 50s, chairman of the Hawkers Association of Beo Crescent Market, and retiree Tay Ah Chuan, 75, a survivor of the fire and founding member of the association.

Ms Koh says: "They have been very generous not only with their stories and their lives, but also with their time."

She laughs as she recalls how she has heard at least five different theories as to why the Bukit Ho Swee fire began. Till today, its origins are surrounded by rumour and speculation. One theory suggests that children's kites might have caught fire. In the past, children would coat their kite strings with crushed glass in order to cut the kite strings of rivals while in flight. One needed fire and glue to attach the glass to the string.

But she hopes the various shows and tours will go beyond "the nostalgia of memories and history".

She says: "I've realised that there is not just one version of history. Everybody has a version of it.

"I don't know if it's necessary to have just one truth or to know who holds the key to the truth - but instead, to know how diverse life can be."