Jenny (not her real name) was months old when her father walked out on the family. Her mother, who was in and out of prison for drug offences, was mostly absent too.

She had her first taste of family life only when a foster family took her in. She was cared for by three such families in her first nine years. Otherwise, she would have been placed in a children's home.

Jenny, now 19, said: "You get to realise the joy of being loved by a family. Though it felt strange at first, it felt right to call them 'mum' and 'dad' as we became closer."

Receiving care at home is more beneficial than being in institutions because people feel more comfortable in a familiar setting.

So it is following a global trend in shifting the care of more vulnerable people - abused or abandoned children, the frail elderly or the disabled - from institutions to homes.

Two-thirds of these children grow up in children's homes and a third live with foster families - a ratio the Ministry of Social and Family Development hopes to reverse in the next five years. To do so, it wants to double the number of foster parents to 500 and will start an $8 million, three-year pilot to set up agencies that better support them.

It also started a pilot initiative last year to provide the disabled with services such as therapy and personal hygiene in their homes.

While baby steps are being taken towards home care for children and the disabled, significant strides are being made in this area for seniors.

From the early 2000s, the Ministry of Health (MOH) has been investing heavily in expanding home-care services by public hospitals and voluntary groups.

Since then, all public hospitals have started home-care programmes for some of their patients.

In five years' time, MOH expects home-care providers, mostly voluntary groups and private players, to be able to serve some 10,000 seniors with home-based health- care and 7,500 of them with home-based personal care each year, up from 6,500 and 1,250 now, respectively.

The progress so far

Public hospitals' home-care programmes have worked in improving care of sickly people, especially the elderly, such that they are being re-admitted less often, or not at all.

For instance, in such a programme for elderly patients who make multiple visits to Alexandra Hospital's emergency department, health workers visit them after their discharge and help with aspects such as wound dressing and home modifications to prevent falls.

Patients get treatment without going to hospital, and the close monitoring prevents complications that require re-admission.

From April 2013 to March last year, 90 per cent of them did not go to the emergency department at all within a month of their discharge.

National University Hospital (NUH) and Singapore General Hospital (SGH) have halved the number of re-admissions and the length of stay.

Home care has also led to saved funds for the state and individual.

In 2008, the Agency for Integrated Care launched a project to form hospital teams to help older patients transit from hospital to home via regular visits and phone calls.

In a 2010 review, it found that running the project for six months cost about $1.94 million, mainly for the workers who went to the homes of 4,000 patients. Yet, $5.3 million was saved from not hospitalising those patients, resulting in net savings of $3.4 million.

Associate Professor Lee Kheng Hock, head of the family medicine and continuing care department at SGH, said: "The average total bill size of C Class admissions is more than $1,000, so a prevented admission saves a lot of money."

Home care for the disabled is nascent, but also looks promising.

In a 2010 pilot, a few intellectually disabled people became more independent after living in a cluster of HDB flats instead of welfare homes. The Government said in 2012 that it intends to expand this.

Singapore lacks data on its fostering scheme, started in 1956, unlike other countries with research comparing foster and institutional care.

While the progress is encouraging, there is still room for improvement.

Hospital re-admission rates remain high even though home-care services have helped lower them.

Almost one in five public hospital patients aged 65 and older is re-admitted within a month - comparable with that of the United States but higher than that of Britain.

This suggests that many people cannot care for themselves properly at home, stakeholders said.

One key reason is the lack of home-care professionals.

NTUC Health faces a similar problem. It served 1,700 clients last year, up from 1,000 clients in 2013, and it plans to double its current staff strength of 226 this year.

To ease manpower woes, operators here are tapping new labour sources such as back-to-work mothers, housewives and graduates of the Institute of Technical Education, which began offering community care courses in recent years.

But more has to be done to draw people to join the home-care sector as career progression is limited, said Associate Professor Corinne Ghoh of the social work department at the National University of Singapore (NUS).

The second obstacle is a lack of support and training for caregivers. Some children move from foster families to welfare homes as foster parents cannot cope with them.

For instance, Jenny stayed with two foster families for only a year. She moved to a children's home in 2005 and has been there since.

Some foster parents did not know how to handle her emotional outbursts. She also considered her foster siblings as "frenemies".

She said: "They behave as friends towards you as their new companion. But as soon as they realise that there is more competition for their parents' love, they feel jealous."

The Haven superintendent Peter Khoo said foster parents and their own children need to be trained in how to relate to, and live with, the new entrants to the family.

Mr Cayden Woo, a team leader at Chen Su Lan Methodist Children's Home, said: "After we train the foster parents, we would know which child-foster parent pair would make a good match and foster parents may also need our guidance along the way."

Caregivers of the elderly, many of whom struggle with burnout, could also do with more support.

A study by Duke-NUS Graduate Medical School revealed that nearly half of all 1,190 caregivers surveyed have jobs. Yet they spend 38 hours every week on caregiving, and are more likely to experience higher caregiver stress and depression.

Another challenge is coordinating the myriad of offerings well.

Senior Minister of State for Health Amy Khor had noted a lack of coordination between separate home-care providers - "not ideal as an individual's health and personal care needs are closely intertwined". 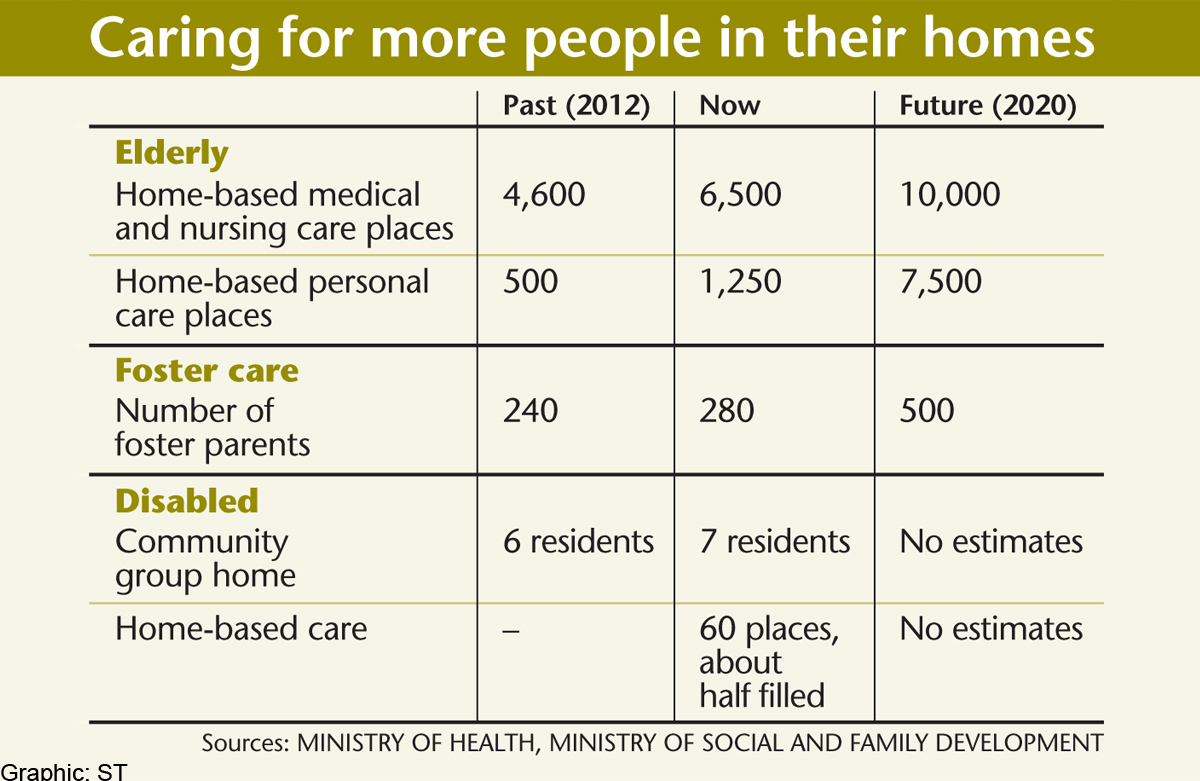 MOH has asked providers to offer a wider range of services, so clients can meet their medical and personal care needs at one go, and no longer need to get nursing from one provider, therapy from another and housekeeping from a third.

This can be advanced by putting an anchor operator in charge of all services within a region, giving providers economies of scale, said operators. Last year, the Government started such a system for senior activity centres and group homes.

MOH is also looking into funding home-care providers on a per- client instead of a per-visit basis, to encourage them to coordinate various services for patients.

These problems are "transitional challenges that can be overcome", said Dr Kang Soon Hock, head of the social science core at SIM University. "Getting awareness and buy-in are the most challenging."

Stakeholders say the biggest hurdles are creating awareness on home-based services and changing mindsets on the viability of home care as a career and way of life.

While most people here wish to live and die at home, their loved ones may prefer to leave them in institutions for their peace of mind.

To attract workers, providers will have to raise pay and come up with career progression paths.

Recruiting foster parents has been an uphill task too as the culture here has yet to accept fostering. Only 30 per cent of vulnerable children here are in foster care, fewer than the 80 per cent in the US.

While home care is becoming important, it "should not be seen as a panacea for all the problems of our system", Prof Lee warned.

A balance needs to be struck between both forms of care, experts said. Hearts and minds need to be won to boost home care.

This article was first published on Mar 1, 2015. Get a copy of The Straits Times or go to straitstimes.com for more stories.