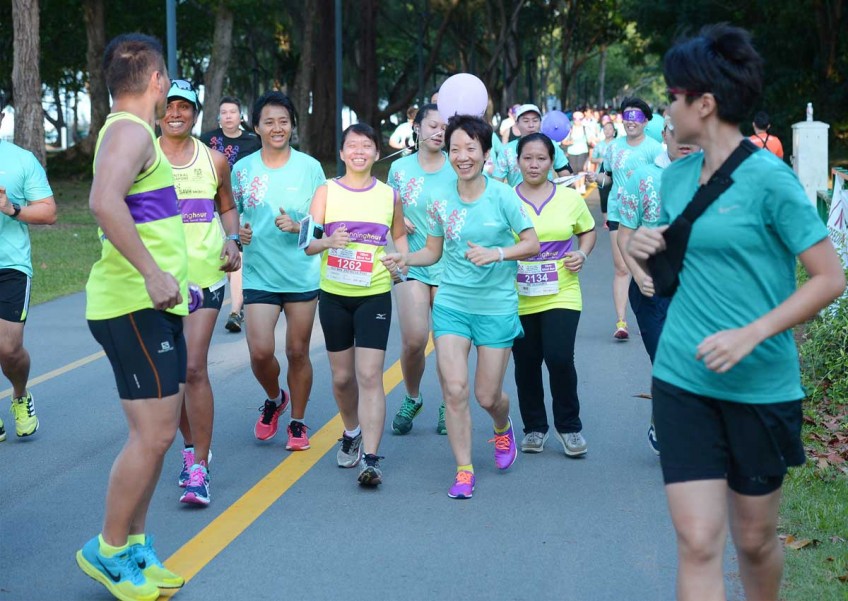 Ms Poo (wearing number 1262), being guided with a hand-held tether by Ms Fu in the Runninghour 2016 race yesterday. Just before this, the Minister for Culture, Community and Youth had run blindfolded for 500m.
The Straits Times

Up until two weeks ago, Miss Patricia Poo harboured no anxiety over Runninghour 2016, the only event in Singapore where participants race alongside runners with special needs.

The 27-year-old visually impaired receptionist, who has taken part in more than 15 races, developed the jitters only when told that her running guide was Minister for Culture, Community and Youth Grace Fu.

"I got a bit nervous, I didn't know what to expect," she said after finding out that the minister would run blindfolded for 500m, and then guide her with a hand-held tether for 500m at the race held at Angsana Green in East Coast Park yesterday morning.

She need not have worried.

"There was no difference between being guided by Ms Fu or my other running guides, and I trust her too," said Ms Poo, who completed the rest of her 5km run with another sighted guide, Ms Geraldine A Susay.

"The run was very good - the terrain was very flat, there were no turns and the road was easy to run."

The youngest of three children of a chauffeur and a pastry maker, she joined Runninghour - a cooperative that promotes the integration of people with special needs through sport, mainly running - three years ago.

She loved it, started training with the club regularly and began taking part in races of between 5km and 10km.

Events that she has taken part in include the Yellow Ribbon Prison Run, StanChart Marathon and, most recently, the Spartan Race Singapore, an obstacle racing series.

"Running makes me happy. When I run, all my worries melt away," said Ms Poo, who is also a committee member at Runninghour, handling membership and events.

Completely blind in her right eye with partial sight in her left, she was born with congenital sclerocornea.

She had two cornea transplants - one at 10 months old, the other when she was four - but both were unsuccessful. She developed glaucoma in her teens and is now a patient at the Singapore National Eye Centre (SNEC).

Despite her disabilities, she has a sunny disposition and a perky personality.

"I will probably feel sad if one day I go completely blind. Then again, maybe something could happen and things could change," said Ms Poo, who completed her secondary education at Bedok South Secondary and has a National ITE Certificate in service skills.

For the past four years, she has been working as a receptionist at the Sengkang Family Services Centre, where she answers phone calls and does administrative work on the computer using a screen-reading software called Window-Eyes.

Except for the fact that she needs a bit of help, Ms Poo said she feels no different from other people.

Besides running, she loves rollercoasters and has set her sights on learning how to bowl next.

Dr David Goh, her eye doctor at the SNEC, was so impressed by her irrepressible optimism that he nominated her for the Singapore Health Inspirational Patient & Caregiver Awards in April this year.

"Patricia faces her struggles - such as medication side effects, surgery and the possibility of total blindness - with exceptional bravery and a positive outlook. It must not only take great courage but also a free-spirited love and appreciation of her other senses to make the most of her condition," he said.

Yesterday, she completed her race in less than an hour.

"I don't really care about time. The whole point is to go out there and do it."