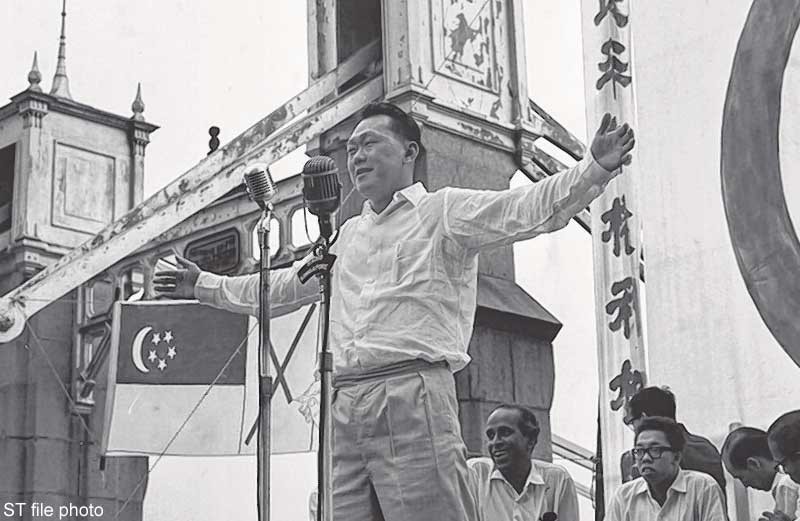 My differences of opinion with Lee Kuan Yew (which included views about the future role of China's Communist Party and other matters, but no matter here) included one about the character of his political genius. For that, as any fair-minded observer of the founding father of bustling modern Singapore knew, was what he was.

But what was its nature?

Lee and his followers, which much of the time included most of the people of Singapore, showed the world that economic self-improvement had to have public policies grounded in best-practice pragmatisms rather than in ideological schematics. It also required hard-working citizens sharing the vision to get off the ground.

Whether your political system was argumentative-parliamentarian, messy-democracy or shut-up authoritarian, the people had to be brought along and had to believe in the leader's way of moving forward if they were to give it their best.

LKY, as he used to sign his private notes, convinced people that his way - hard work, scientific public policy, political-party monopoly, clean government and media as ally, not as smarty-pants second-guesser - would work if given a chance. And it did.

In his own phraseology, Singapore went from Third World to First in almost a generation's time, never stopping for a rest, much less to entertain a second guess or tolerate second-guessers.

I once offered him the formulation of the late Isaiah Berlin, the great Oxford don who imagined political genius in the manner of Tolstoy. The great ones were either "hedgehogs" (one giant idea brainiacs) or "foxes" (a million clever approaches). Their political sense was either multifaceted (the ultra-alert fox who knew a thousand ways to survive) or the one-big-idea porcupine (with but a single survival move - yet it was a prickly doozey!).

The wartime Winston Churchill with all his many tricks was a fox; Albert Einstein, who could barely cross a street without help, was nonetheless the hedgehog with his one world-changing idea.

LKY, only grudgingly accepting my Berlin-Tolstoy dichotomy, insisted he was a fox, not a hedgehog: "You may call me a 'utilitarian' or whatever. I am interested in what works."

He had a strong argument. Really good and sophisticated governance requires a map of multiple routes to the future, not to mention mature management of the present.

Critics belittled the result as a "nanny state", but not every nanny was as competent and diligent as this one. Little Singapore's journey also needed a team of like-minded colleagues and a talented people, with a Confucian culture that could tolerate exceptionally strong and singular leadership.

So I accepted his demurrer and had to face facts; Einstein, after all, had worked more or less alone, not with a Cabinet full of ministers and dozens of problems pressing daily. Besides, who would know him better than himself? Perhaps only his late wife Choo understood what was behind that iconic public face that at one hour could be so gruff and cold and intimidating - and two hours later so charming and gracious and reasonable.

I told him I marveled at how well Singaporeans understood him, but he shook his head and snapped back: "They think they know me, but they only know the public me."

My sense is that, for all his writings and interviews, and for all the media on him, he was right about that. So we await the some future longish biography that gets to the real bones-and-flesh human man behind the larger-than-life public figure.

In his own phraseology, Singapore went from Third World to First in almost a generation's time.

For the interim version, I tried - probing him with annoying questions about his sons, including the current well-performing prime minister; his daughter, the brilliant medical professional; and of course his late wife. And that did let in some light.

But when once asked whether there was anyone alive who was like him, he answered without apology: "I do not know of any person who is most like me."

About that - again - he may very well have been right, but if so, that helps make my case for awarding him hedgehog honors despite everything. Sure, I'm stubborn about this, but let us note that in one conversation he summoned up the notable figure Jean Monnet (1888-1979), whom history reveres for his prophetic vision of European unity, by way of a Common Market and European Union.

For this one singular contribution, Monnet gets marked as a political hedgehog. So how is the Lee Kuan Yew a modern Monnet, as I suspect history will say?

We will require more time to helicopter upward for the illuminating panoramic view. But in my mind with each year in power he grew into a composite figure, a dual icon of sorts where a modern-day Plato (glowing with the vision of an ideal city-state run solely by the virtuous) fused with a modern-day Machiavelli (calculating strategies to keep the "soft-headed" utopian vision from getting its head chopped off).

To govern in these fraught times, I am afraid to say it but you need to be both. The political hedgehog in effect must have two sides to his political being. As Machiavelli insisted, it was best if the leader was both feared and loved.

Because Lee Kuan Yew had it all, he became a political giant of his time. Personally, over the decades, I met no one most like him.

I wish his surviving family and relatives the very best, and thank him for all the time he offered me - and for all the wisdom and insights he gave me that I hope will never leave me.

The writer is the author of Conversations with Lee Kuan Yew in the Giants of Asia book series. His next book is The Fine Art of the Interview. He is the distinguished scholar of Asian and Pacific Studies at Loyola Marymount University in Los Angeles.