Who's afraid of learning Mandarin? 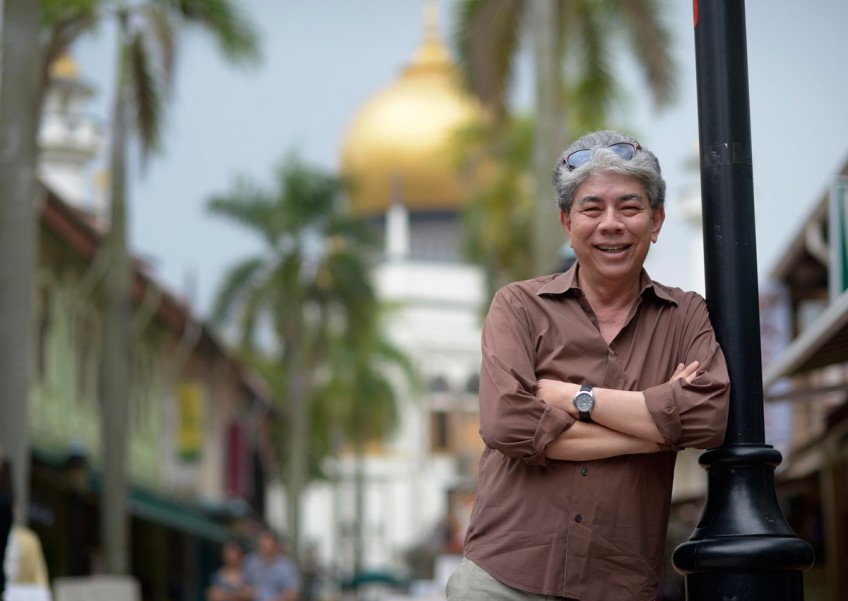 Singaporean businessman Syed Alwi Aidid still runs the trading company that his late father founded in Bussorah Street. He is also a trustee of the nearby Masjid Sultan.
The Straits Times

One day in 1946, Penang-born gold and diamond salesman Syed Mohammad Alwi Aidid hitched a ride in the back of a goods lorry bound for Singapore from the Malayan island.

He was in search of his own fortune, as his family's jewellery business, New Gold Company at 218, Penang Road - in Penang - was largely in the hands of his uncles.

He had also just married his colleague, Miss Tang Nyuk Ying, who was born in Kampar, a tin mining town in the Malayan state of Perak.

She converted to Islam upon marriage and was thereafter known as Mariam Abdullah.

Recalling all that, their elder son, Singaporean businessman Syed Alwi Aidid, says: "He decided that he should go to Singapore first before taking my mother there."

Mr Syed Alwi, 65, adds that the roiling politics of Malaya's Malays then, agitating for independence from Britain, was another big reason his father hightailed it to Singapore.

His father's granduncle, Datuk Syed Murtadza Aidid, better known as Tuan Haji S.M. Aidid, was one of the pioneers of Umno. He stood shoulder to shoulder with, among others, Malaysia's first prime minister, Tunku Abdul Rahman, when Umno was founded in 1946.

But Mr Syed Mohammad was "just not interested in politics", says his son. "If he had stayed on, they would have pressured him into joining politics."

That was, for instance, how his cousin, Tan Sri Datuk Syed Hassan Aidid, who had been running New Gold Company, eventually became a state senator and then deputy governor of Penang.

Like most long-settled Arabs here, the Aidids were originally from Hadhramaut in southern Yemen.

Upon arriving in Singapore, Mr Syed Mohammad got himself a job as manager at the Singapore Cooperative Society, a sort of precursor to NTUC FairPrice.

After three years there, in 1949, he found his position secure enough to bring his wife to Singapore, by ship.

Despite shunning politics, Mr Syed Mohammad eventually got involved in some of it, when the Arab community here made him president of the Arab Association of Singapore, twice.

Mr Syed Alwi recalls how far-sighted his father was. "He said the future of Singapore is Mandarin, and registered me to study it as a second language."

Mr Syed Alwi chafed at that language choice but stuck it out at Raffles Institution, where he was one among the 10 non-Chinese students in his cohort learning the language.

He recalls: "By the time I sat the equivalent of O levels, I was the only one left taking Mandarin. I dared not drop the subject because I was scared of my father.

"And my teachers called me up and said, 'You are the only one left. Make us proud.'"

By then, he was also fluent in Penang-accented Hokkien, which his mother spoke to him; Cantonese, which he learnt from his nanny; and Teochew, which he picked up from his neighbours in Beng Wan Road, off Serangoon Road, where he lived in his family's bungalow.

Today, the father of four and grandfather of three is a trustee of Masjid Sultan in Muscat Street and second vice-president of the Arab Association of Singapore.

He runs the trading company his father founded. Based in Bussorah Street, he deals in building materials such as timber and also gaharu, or agarwood.

His business often takes him to places such as Thailand, where his friends keep special pots and pans to cook meals for this strict Muslim.

It was Mr Syed Alwi's great-great- grandfather who ventured out from Yemen to Pontianak in Kalimantan, Indonesia.

Mr Syed Alwi's grandfather then moved from Pontianak to Penang in the late 1800s.

And although Mr Syed Alwi claims to "have given back two- thirds of my Mandarin to my teachers", he is still sought after as a translator by Middle Eastern merchants who do business in Taiwan and other Mandarin-speaking places.

He says: "When I go to, say, Taiwan with my Arab clients, I don't tell people that I speak Mandarin. We all speak in English and my clients will ask me, 'Why aren't you speaking Mandarin?'

"I reply, 'I will let them know that I can speak it when it's necessary. I want to see how sincere they are and what they are saying behind our backs first.'"

This article was first published on Sept 24, 2015.
Get a copy of The Straits Times or go to straitstimes.com for more stories.