WHO'S A CORE S'POREAN? 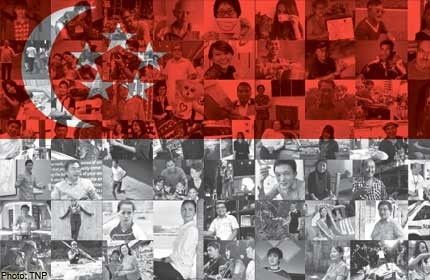 This term was first raised in Parliament during the debate on the Population White Paper, back in February.

At the time, Deputy Prime Minister Teo Chee Hean had brought up the term after he spoke about nurturing and sustaining this core, especially in light of growing concern that there would be a diluted Singaporean identity with the influx of new citizens.

The White Paper had projected that there would be 6.9 million people in Singapore by 2030.

Of these, about 3.8 million or 55 per cent - down from 62 per cent currently - were meant to be Singaporeans with the rest permanent residents and foreigners on work passes.

Soon after, a discussion arose over what exactly constituted this core, and whether possessing a pink identity card was sufficient to qualify one as such.

The New Paper then launched its own Hardcore Singapore project. Over five months, the paper found over 100 Singapore citizens from different backgrounds. People were also invited to write in to the paper if they considered themselves to be a core Singaporean.

Aged 18 to 80, alongside their interesting stories, they were asked what qualities made them Singaporeans, which dish they would miss most when overseas, the little quirks that they see in Singapore, favourite Singlish phrases and how they would describe Singapore to a stranger.

And there were many answers: Ms Lynn Ee, a chef, said that the primary qualification to be part of that core was the fact that one has family or history here.

Freelance writer Balvinder Sandhu, on the other hand, said it is a tendency to complain that made one a Singaporean.

Another suggested criteria? Many had noted that Singlish was a common glue and that no English word could effectively convey the meanings of Singlish words like "shiok" and "wah lau".

From the infamous kiasu attitude to the mastery of Singlish, these Singaporeans have cited many qualities that ultimately define them as a true blue citizen.

One reader, Mr Goh Mia Chuan, 67, e-mailed TNP and declared himself a "true, hardcore Singaporean" because he spoke enough Teochew, Hokkien and even Malay to communicate with his neighbours at his kampung at Lorong Limau where he grew up.

This facility with languages was also common among several other interviewees, including prominent personality Eunice Olsen, who speaks both Mandarin and Teochew.

She also said that she noticed that Singaporeans would constantly press the lift buttons.

She'd said: "Singaporeans... must press it repeatedly, as if it will come faster if they do that."

Going by the people interviewed, the list of what made a Singaporean at heart was quite diverse; but sociologist Tan Ern Ser told TNP: "From a legal perspective, it's quite straight forward. A citizen is a citizen, whether natural or naturalized."

But he said certain elements tended to identify with Singaporeans more: "History, a common experience, culture, language, values, food, and maybe a common resentment towards foreigners whom they deem to be here to take away what's theirs."

Yet, Mr Tan said: "It's not easy to define, but most people would think they know who belongs to the Singaporean core."

Marine Parade GRC MP Tin Pei Ling said that while certain characteristics like the love for chicken rice, and the people's hardworking nature can define a Singaporean, she said that there is something more.

Ms Tin said: "The Singaporean core is a group who share common values, who believe in our nation and want to make it better, and very importantly, who will stay and defend Singapore when we face a crisis."

But she also said that while Singaporeans born and bred here have a lifetime to imbibe our values and unique culture, they must also be open... to those who sincerely want to be Singaporeans.

Tampines GRC MP Baey Yam Keng said: "I would think core Singaporeans behave and live by the Singapore lifestyle and culture, like enjoying the local food here and speaking Singlish."

He added: "Being able to relate to other Singaporeans almost immediately is a clear sign of a core Singaporean.

"You know when you are overseas and you hear a Singaporean speaking, and it just excites you that there is another Singaporean nearby? That's a core Singaporean as well."