Why Singa quit being a mascot 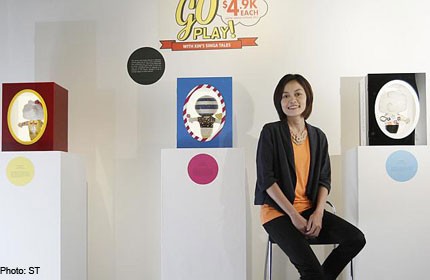 The Mcplushophile and I Quit, which anchors the exhibition by artist Xin Xiaochang (above).

When campaign mascot Singa the Lion announced it was quitting as ambassador of the Singapore Kindness Movement in May, many Singaporeans were startled by the news, including artist Xin Xiaochang.

She says: "I was shocked. 'He what?!' I thought. How could a courtesy mascot resign?"

Xin, 31, has a special affinity for the icon.

The leonine character was a key subject in her solo exhibition in October last year, which was based on national campaigns that promote social graces.

Her emotional response to Singa's giving up was what the Singapore Kindness Movement had hoped to provoke.

The movement's general secretary William Wan had said in an earlier report in this newspaper that one aim of the mascot's resignation was "to generate conversations and reactions online". He added that Singa may make a comeback.

Xin has hastened the mascot's reappearance in public by making it the focus of her latest solo show at Galerie Sogan & Art in Mohamed Sultan Road.

She says: "I really wanted to do something about Singa quitting. After I read his resignation letter online, I started thinking about what could have caused him to quit."

She quickly identified a range of hot-button issues that Singaporeans rant about, which she posits, could have wearied the mascot and made it throw in the towel.

These issues set the stage for eight fictional dioramas in the exhibition, which spotlight everything from the exorbitant certificate of entitlement (COE) prices for vehicles to Singapore's high-pressure education system, with Singa as the protagonist.

The works in this show mark the first time she is working in a narrative fashion and with dioramas.

She says: "I wanted the works to be able to reach out to the masses, for Singaporeans to know exactly what the sculptures are talking about."

Although the dioramas are clear-cut in their depiction, each scene is composed of many elements and every part had to be painstakingly fashioned by hand.

The diorama, I 'Love' Driving Paper And Sardine Rides, which alludes to the public's transport woes, for example, is packed with details.

Singa is placed in what looks like a car but, on closer inspection, it actually mimics a sandwich board.

The form of the car alludes to the COE, a pricey paper document.

The mascot also holds onto a train of sardines, as well as a cup of beverage and the overhead strap of a train. The sardine cans show fishes dressed in office attire and carrying briefcases and tablet computers.

Together, the elements paint a picture of the crowded public trains here and the transport agency's move to ease congestion by enticing straphangers to avoid peak-period morning commute with the promise of a leisurely breakfast if one gets to work early.

She also tackles the recent McDonald's Hello Kitty plush-toy craze with her own version of a collector's box-set that features Singa the Lion as the collectible, albeit dressed as different characters such as an addict of the smartphone game Candy Crush Saga.

On the cartoonish, Pop Art vibe of her works, she says: "People are drawn to icons of contemporary culture so this allows me to connect with them.

"I also want to bring a smile to those who look at my works."

She hopes that the humour in her works will also prompt people "to reflect on their behaviour and response to social issues".

As to whether her trendy works might become dated with time, she says: "No, I think they will be a mark of time and people will still be able to relate to them 10 or 20 years later."