From wielding a parang to teaching 3-D art 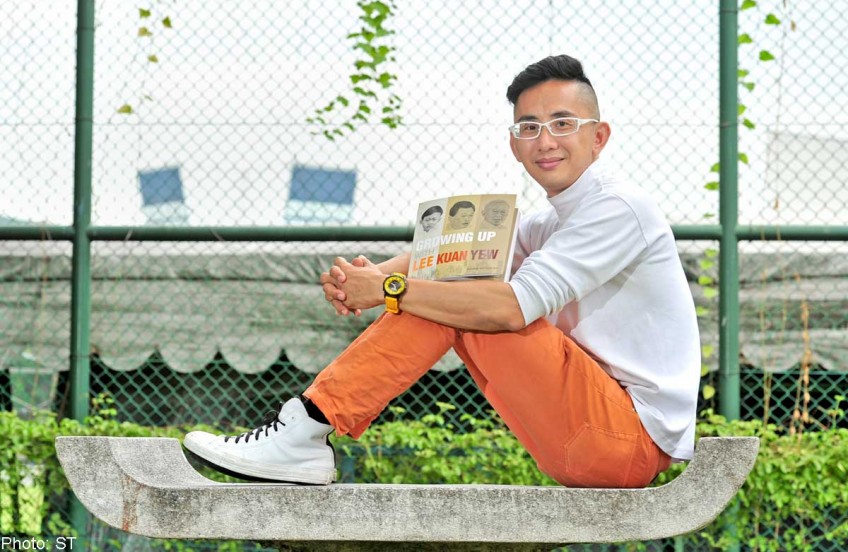 Lawrence Koh has updated his 2000 bestseller, Growing Up With Lee Kuan Yew, with a portion about the death of the founding prime minister’s wife.

At the height of a troubled adolescence spent mixing with bad company, 15-year-old Lawrence Koh rushed out of the house with a parang hastily wrapped in newspaper to join a fight.

But he stopped dead in his tracks at the sight of his mother's tears.

"It broke my heart and - I did not know this was such a physical feeling - my chest literally hurt," says Koh, now 41.

At the door of their one-room flat in Tanglin Halt, his mother tearfully asked him why he, like his father - whom she had divorced - made her cry.

The incident jolted Koh into getting on the straight and narrow. Although he failed his O levels twice, he enrolled in a visual communication course at the Nanyang Academy of Fine Arts (Nafa) to hone his drawing skills.

Today, he is the author of illustrated book Growing Up With Lee Kuan Yew, which has hit the local children's bestsellers list since it was rereleased last month. The first edition, published in 2000, had sold out its print run of about 7,000 copies. Some 3,000 copies of the updated version have been sold so far.

In the update, he adds to the story of founding prime minister Lee Kuan Yew, the death of his wife, Madam Kwa Geok Choo, in 2010.

Koh also adds a chapter on nation-building to pay tribute to Mr Lee's contributions to Singapore. This includes the formation of the People's Action Party and merger with Malaysia - including a comic strip version based on iconic moving images of Mr Lee weeping as he announced the separation in 1965.

"Mr Lee was the founding father of Singapore and laid the foundations of this country. I hope that through this book, the younger generation can remember his contributions," he says.

Drawing, for him, is a way of creating a "better world", referring to his troubled adolescence.

This sentiment translates to his works, as he tries to make his caricatures look more affable.

"When I am drawing, I like to explore my subjects' thoughts and character, make them more youthful and kind - with features such as thicker hair," he says.

In 2004, he was a bundle of nerves at a 15-minute meeting with Mr Lee at the Istana. "I forgot everything I had prepared to say and just stuttered when Mr Lee asked me questions," he says.

He does remember the closing bit: He told Mr Lee he hoped to design an animated clip of his book, to which Mr Lee laughed heartily and told him: "I will not stop you."

Days after the meeting, Koh flew to the United States on a Media Development Authority scholarship to pursue a Master of Fine Arts degree in animation at the Savannah College of Arts and Design.

He had stellar references: former Nafa principal Ho Kah Leong and Professor Tommy Koh, a former National Arts Council chairman, both of whom he had approached for advice on whether art was a viable career in Singapore.

They advised him to learn 3-D art, to tap into the burgeoning animation industry.

It turned out to be useful advice. Koh is now a lecturer in 3-D interactive media technology at Temasek Polytechnic, a contrast with his bumpy start in an art career.

When he graduated from Nafa, he worked as an art director at an advertising firm, which shut its doors a year later in 2003, much to his dismay.

After attempts to find other jobs tanked, he started to work on the streets, setting up with his pencils and colours outside shopping malls to draw caricatures of people for S$10 a drawing.

It was an interesting time, he says. "I saw that the 'rules of the street' are very important," says Koh, who peddled his skills in Tampines and Boon Lay.

Those areas, he says, were acceptable spots for busking, as other areas had been "reserved" by other street buskers.

His streetsmart ways also led him to buy coffee for his "neighbours" - DVD sellers who peddled their wares alongside him - so they would be willing to help watch his stuff when he took a break.

He made about S$2,000 a month on 12-hour days, seven days a week - with occasional stints drawing at funfairs - but he maintains that was the "lowest point in my life".

A passer-by had come up to him on the streets with her son, pointed to him and told the boy: "Are you sure you still want to be an artist?"

The one-year experience on the streets spurred his ambition to win the scholarship, as well as affirm his commitment to his wife, former marketing executive Elina Ng, 43.

He had lost his art director job days before the couple were due to get married, so he had asked Ms Ng if she still wanted to go ahead with the marriage.

Yes, she said, because being an artist is a respectable profession. The couple now have a five-year-old son and seven-year-old daughter, and live in a five-room Housing Board flat in Choa Chu Kang.

His wife had quit her job to follow him to the US for his master's degree studies and later to Japan for two years as he took a job with Polygon Pictures, where he worked on pachinko advertisements and the Winnie The Pooh animated series.

To make ends meet away from home, she took on waitressing and sewing jobs.

He says his greatest challenge now is motivating young adults.

"I would like for them to hear about my journey and to go one step further than I have - that would be most satisfying for me."

Growing Up With Lee Kuan Yew by Lawrence Koh Choon Teck is available for S$21.90 at major bookstores.