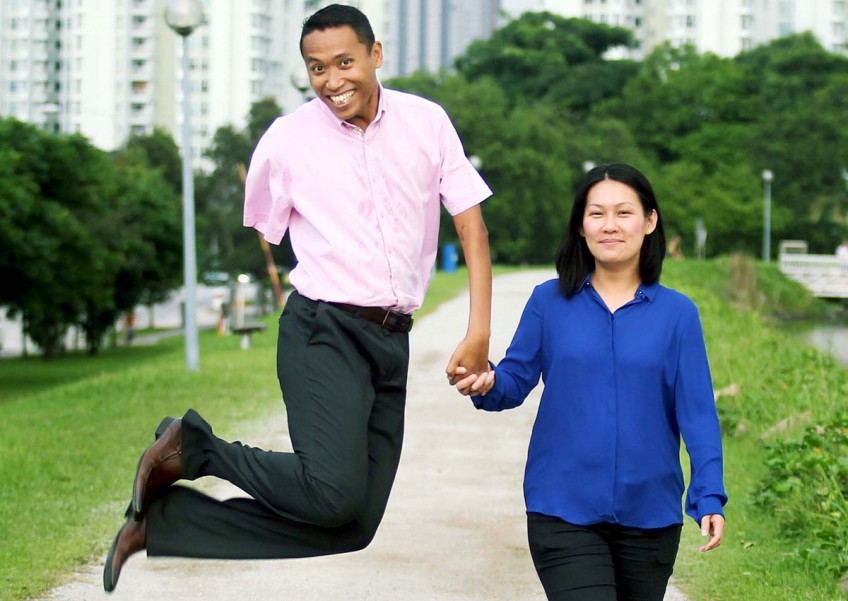 Adam Kamis, a para-athlete, leaving the State Courts. He lured women through social media into the vice trade and duped them into having sex with him.
The Straits Times

The bed in which her husband cheated on her is where she must sleep every night.

It is no wonder that Ms Ally Kuan, 36, the wife of convicted pimp Adam Kamis, has not been sleeping well.

She wanted to talk about her ordeal but is still so traumatised that she got her counsellor, Mr Jeffrey Mak, 49, to speak to the media on her behalf.

"She is struggling to accept everything, and has not been sleeping well," said Mr Mak, who has counselled the couple since Adam's crimes came to light last year.

"She keeps thinking of the 16-year-old girl he slept with, that she could've been their daughter.

"She still cannot come to terms with it and is traumatised. She did not sleep the whole night before the sentencing."

Adam, 37, was jailed for 38 months yesterday after pleading guilty last Monday to 11 counts of procuring women for prostitution and one count of child trafficking under the Prevention of Human Trafficking Act.

He had recruited women, including the 16-year-old student, by making them go through a questionnaire and "verification" test, which required them to have sex with him in his Yishun flat.

It was a fall from grace for the para-athlete who had done Singapore proud by winning gold in the men's 1,500m at the 2009 ASEAN Para Games.

In 2008, he became the first para-athlete to complete the Vertical Marathon. He also competed in the Commonwealth Games in 2010.

Mr Mak said Ms Kuan, who married Adam in November 2012, knew nothing of what her husband had done. She found out the extent of his vice operations only after it was dredged up in court and reported in the media.

"Initially, she didn't know there were so many women and that it was happening in their home," he said.

"Adam only told her that there were two women, and denied that it was happening in their flat."

Adam lost his right arm and his left arm became paralysed in a motorcycle accident in 2003.

Ms Kuan managed the finances and housekeeping, as well as attended to his needs.

"She was the one doing everything, looking after him and the home, and didn't expect this to happen," said Mr Mak.

"There has to be trust in love, so you might ask, how can she continue to love and trust him like that?

"But in love, there is no measurement. She continues to love him unconditionally."

He added that Ms Kuan intends to forgive Adam but needs time to heal.

"The forgiveness will come, but she asks for time alone to get back on her feet," said Mr Mak.

"It's not okay for her, but she says she will forgive Adam."

"She wants to say sorry to the victims, to apologise on her husband's behalf," said Mr Mak.

He also said that she intends to go to work today, despite all that has happened.

"She realises she still has to face reality despite all that she is going through," he said.

Applicants asked if they were open to role-playing

It was a job application and like any hiring exercise, the applicants needed to fill up a questionnaire.

But it involved explicit questions about various sex acts they were willing to engage in.

It was for a social escort agency run by former para-athlete Adam Kamis, who later had sex with some of the applicants in his Yishun flat to "test" them out.

His victims, whose ages ranged from 16 to 38, included students, a childcare teacher, a dental assistant and a mother of two. They cannot be named to protect their identities.

When recruiting them online, he gave them a three-page questionnaire. It had 14 questions asking for their biodata and vital statistics like height, weight and bra size.

The less explicit ones included whether they were open to kissing, petting, giving massages, showering with the client and role-playing.

The women also had to indicate if they were able to meet and service clients in public places like parks, staircase landings and vehicles.

The more explicit ones are not fit for publication in this newspaper.

Court documents revealed that he set up social escort agency SG Freelancers because he was in debt. Posing as a freelance female escort, Adam recruited women via e-mail, Facebook messages and advertisements.

A total of 34 women responded to the job advertisements.

After indicating their interest, the women were asked to complete the questionnaire and submit photos of themselves fully-clothed and in lingerie.

Adam invited them to his home for an interview, where he introduced himself as a handler at the agency.

The women then had to undergo a "verification" test - some of them multiple times - where he inspected their naked bodies and had sex with them to ensure they were willing to provide sexual services to clients.

If the women were still keen on joining the agency after the test, he would advertise their services on various websites.

But between early 2013 and October 2015, Adam only managed to secure five clients and did not receive any commission.

Deputy Public Prosecutor Sharmila Sripathy-Shanaz said in her submissions that Adam acted as a classic pimp whose recruitment process was detailed and meticulous.

She added: "The accused's offences are of a genre that causes feelings of revulsion to the community. Left unaddressed, such offences have the potential to undermine the very social fabric of our society."

This article was first published on June 28, 2016.
Get The New Paper for more stories.