It's not every day that one comes across a monkey with a bubble tea cup over its head, but for the folks involved in a local wildlife conservation project, primates interacting with discarded food packaging is an unfortunately common sight.

In a Facebook post on Sunday (Aug 25), Glendon Kee, an intern with the Raffles' Banded Langurs Working Group (RBLWG), documented his encounter with a group of macaques.

While out on a field survey along Old Upper Thomson Road on Aug 17, Kee and a fellow intern spotted several juvenile macaques playing with one another when one suddenly emerged from the treeline with a discarded bubble tea cup in hand. Another followed behind, biting on a takeaway plate.

A total of four macaques were so engrossed in handling the plastic waste that they ignored the rest of the group, Kee told AsiaOne.

Having associated plastic containers with food, all macaques would interact with them, he noted. However, the young ones would be more curious and hence get easily distracted by the trash.

According to the RBLWG, long-tailed macaques spend a large amount of time interacting with one another.

Unfortunately, the time spent playing with food waste reduces the time where young macaques can bond with each other and pick up necessary life skills from their elders, such as identifying edible plants, understanding how to safely navigate through the forest, or avoiding danger.

Food waste and plastic trash, therefore, pose a problem to the monkeys' survival.

"By disposing of food trash in and around nature parks, we provide an opportunity for animals like macaques to rummage through bins which might not be properly secured," Kee wrote.

"We not only create hazards for wild animals and contribute further damage to the environment with our trash, but might also deny the macaques socialisation time with their buddies."

The team behind RBLWG stressed that macaques are edge-dwelling animals — commonly found around the fringe of forest habitats — they are not waiting for food from humans. Therefore, members of the public are advised against feeding the wild animals.

Apart from health complications such as nutrition and obesity-related diseases, the animals would associate humans as a source of food, which in turn drives them to urban areas. This increases the chances of human-wildlife conflicts as well as the later becoming roadkill. 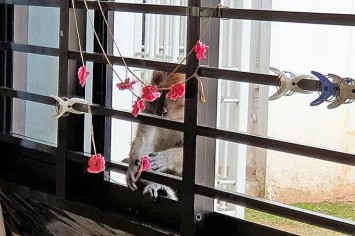 Macaques have been spotted frequenting urban areas in Singapore in recent years. In January, a monkey gate-crashed a birthday party held at a childcare centre in Panjang before the Animal Concerns Research and Education Society (Acres) stepped in to relocate the animal.

In August, another macaque was spotted running away with a loaf of bread from a supermarket at Fernvale Link. According to an employee, the monkey had stolen from them on six occasions since the end of last year.

With amendments made to the Wild Animals and Birds Act in March this year, the feeding of wildlife has been made illegal islandwide.

The National Parks Board (NParks) also advised members of the public to properly dispose of their trash in secured rubbish bins to avoid attracting monkeys.