Woman, 83, punched because she woke sleeping man in park 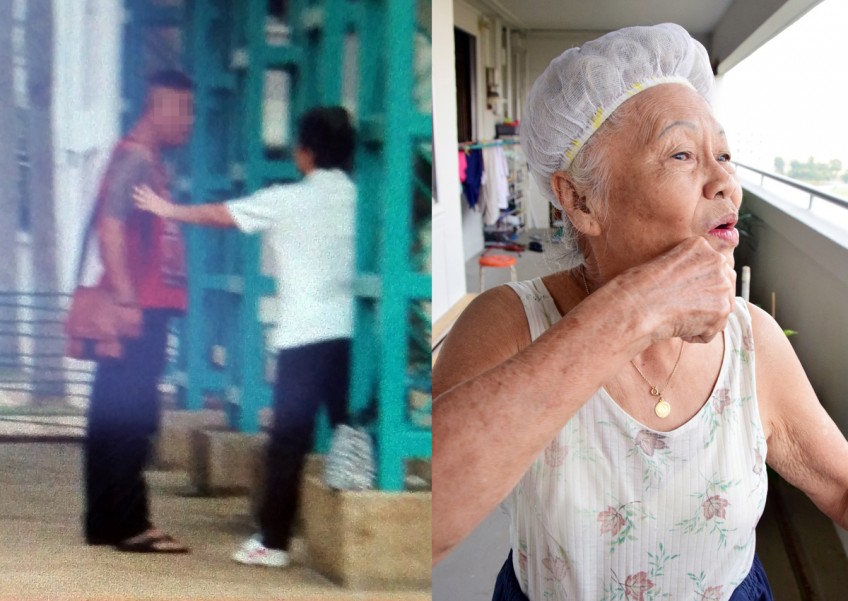 A witness took a picture of the alleged attacker (left), who was described as muscular and tattooed.
Lianhe Wanbao

The conflict started over the use of a bench at a neighbourhood park.

But it quickly escalated into a vulgarity-laden quarrel, in which one elderly woman was punched and another shoved to the ground, causing her head to be injured, reported Chinese daily Lianhe Wanbao on Tuesday (Oct 20).

The women were part of an exercise group that meets every morning at a pavilion near Block 617, Hougang Avenue 8.

The attacker, who was described as muscular and tattooed, was sleeping on a bench near the group's exercise spot.

The fight started when Madam Lim tried to wake him up.

She told Lianhe Wanbao: "He started spouting vulgarities at me, so I asked if anyone had a mobile phone so that I could call the police.

"Before I knew it, I was punched in the face and felt dizzy.

"And by the time I regained my senses, my friend was on the floor, with blood all over her head."

Madam Tan was shoved when the attacker wanted to hit Madam Lim again and she tried to intervene.

Madam Tan told Wanbao: "I wanted to pull Madam Lim away from the attacker and I didn't think that the man would actually push me."

She said she started bleeding profusely because she lost her footing and fell headfirst on the stairs.

She was sent to Tan Tock Seng Hospital, where she was warded for observation to check if there were any blood clots in her brain.

The attacker escaped after he saw Madam Tan lying on the floor.

The two women, who have known each other for more than 20 years, have a close relationship.

Madam Lim has been apologising continually for her friend's injury.

She said: "I'm so grateful to my friend for stepping in and I feel so bad that she got injured."

But Madam Tan shrugged it off, adding: "Madam Lim is already in her 80s, she probably couldn't take another blow."

A group of women in the exercise group decided to look for the aggressor after he escaped and tracked him down to a nearby coffee shop.

They took photos of him and called the police.

A police spokesman confirmed that they received a request for assistance at 7.15am on Monday.

A case of voluntarily causing hurt was established.

This article was first published on October 21, 2015.
Get The New Paper for more stories.