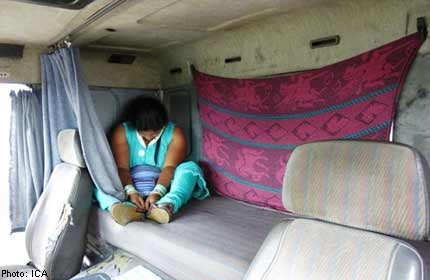 SINGAPORE - A 29-year-old woman was caught trying to leave Singapore illegally by hiding behind a veiled curtain in a lorry.

On Aug 13, at around 12.20pm, a Malaysian-registered lorry driven by a lone male driver was stopped for checks by Immigration and Checkpoints Authority (ICA) officers at the cargo zone of Tuas Checkpoint.

During the checks, officers noticed the driver's cabin was partitioned by a curtain. After drawing them apart, they found a woman curled up within the cramped space.

The 54-year-old Malaysian driver and the 29-year-old Sri Lankan woman were immediately placed under arrest.

Investigations are on-going and the vehicle has been detained and is liable for forfeiture.