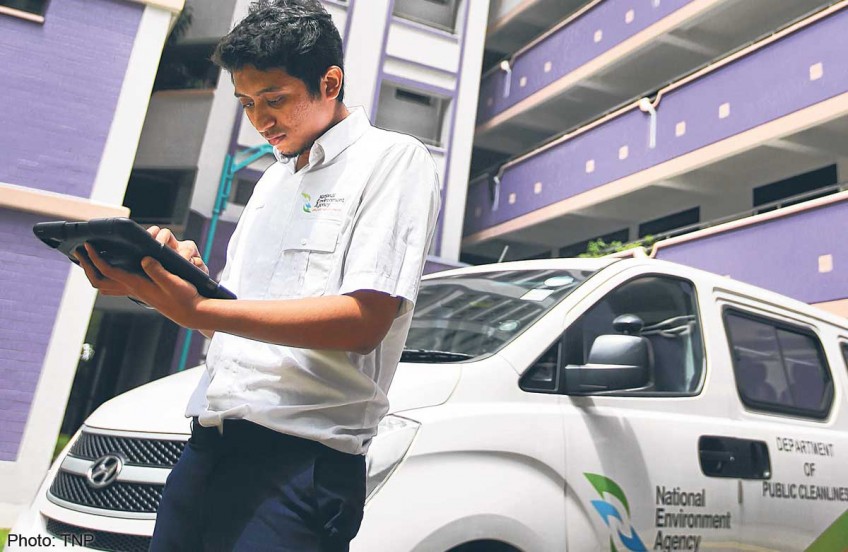 Choa Chu Kang has been hit the hardest by dengue for 2014, reports NEA, with 29 of the cases coming from a single block - Block 485D at Choa Chu Kang Avenue 5. An NEA official inspecting the area around Block 485D.

And at the worst of times, because the infections occurred in the midst of Ramadan.

One by one, the family of four living in a five-room flat in Block 485D at Choa Chu Kang Avenue 5 were infected over three weeks.

"All of us were in so much pain and always so nauseated that we couldn't even eat," said Madam Ramnah Adnan, 54.

Her daughter, Madam Nuraini Rosli, 32, who works at the Jurong Community Development Council, was the first to be infected, said Madam Ramnah. "I remember Nuraini always feeling like she was going to throw up at that time."

Madam Nuraini went to see her family doctor in Choa Chu Kang, who advised her to go to Choa Chu Kang Polyclinic for blood tests.

The tests proved positive for dengue and Madam Nuraini was warded at the National University Hospital (NUH) for three days.

Shortly after, Madam Ramnah herself began to feel unwell. "I started feeling giddy and had a bad headache, too," she said.

She visited the same family doctor, who advised her to head to NUH, where blood tests revealed that she had a minor case of dengue.

Madam Ramnah was told to remain in hospital, but she felt well enough to return home by the end of the day.

She said that NUH medical officers had advised her to visit the polyclinic regularly to get her blood tested. She was told to drink plenty of water. She was also prescribed painkillers for her headache.

"I went to the polyclinic last week and again on Wednesday and they told me I was fine," she said.

"I had bad body aches. I felt weak and nauseous," said Madam Nurazlina, a housewife. Nur was also feverish and nauseous. Both went to NUH directly to seek treatment.

"They put me on the drip, about six or seven bottles," said Ms Nurazlina, who had difficulty eating because of constant nausea.

Both mother and child were warded for three days. They were advised to rest and drink lots of water.

On Thursday, all four were fully recovered and have gone back to their daily routines. They have also resumed fasting in observance of Ramadan.

"When we were sick, of course we had to eat and drink for strength, although it was Ramadan," said Madam Ramnah.

Now, she is not taking any chances in dengue prevention.

"I used up an entire can of mosquito repellent to spray the whole house. I put one mosquito coil in every room, all day and night."

Ms Siti Hanijah, 24, said her body aches were at times so bad that she could hardly move.

"I was in so much pain that I couldn't even get up in the morning," said the housewife and resident of Block 485D.

It all began with a fever and a headache two weeks ago. She also started developing rashes all over her body.

She saw a doctor, who advised her to go to a polyclinic for blood tests.

For three straight days, the mother of one went in and out of Aljunied polyclinic for blood tests.

She was then advised to stay home and drink plenty of water.

"There have been lots and lots of mosquitoes here for the past few weeks," she said.

Although Ms Siti is now feeling better, she is taking extra precautions to ensure that her family is safe.

"I have used up about two cans of insecticide," she said.

- Member of Parliament for Choa Chu Kang GRC Zaqy Mohamad and 120 volunteers conducted house-to-house visits on Sunday. Repellents and granular insecticides were distributed to residents during these visits.

- NEA, together with other Government agencies from the Inter-Agency Dengue Task Force and all Town Councils are continuing to inspect public areas and housing estates for potential breeding grounds, and are sending officers to conduct daily checks for breeding habitats in high-risk areas.

- According to the latest dengue data taken from the NEA website (www.dengue.gov.sg), 673 cases of dengue were reported islandwide between June 22 and 28 this year, followed by 891 the following week and 822 the week after. For the period between July 13 and 16 alone, 359 cases have been reported.