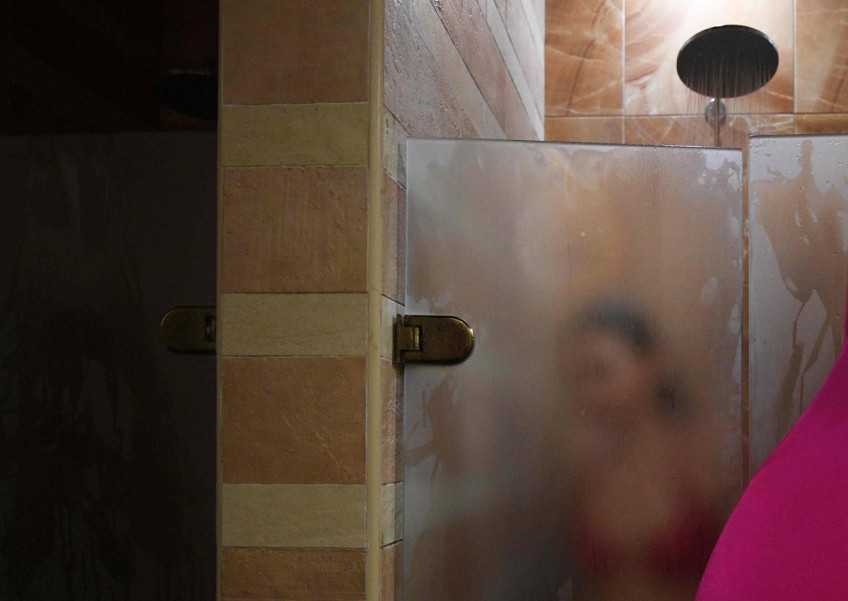 When a woman discovered her husband had videos of her friends in bathrooms on his mobile phone, she reported him to the police.

Kevin Chin Thain Min, 35, was arrested at Changi Airport on March 3 last year, and was yesterday sentenced to 14 days' short detention order - a community- based sentencing.

He had pleaded guilty to four counts of insulting modesty and one each of theft and house trespass. Another 12 charges were considered.

The court heard that the freelance motoring journalist had filmed two women he developed a crush on.

Deputy Public Prosecutor Tan Yanying said that some time in June 2014, Chin stole the key to a female friend's home while he was there on an invitation. She lived there with her husband.

He planned to place a peephole camera in her bathroom to secretly film her either taking a shower or using the bathroom.

Some time between October and December 2014, he used the key to enter her home and installed the camera inside a small crack in the bathroom's false ceiling.

As a result, he was able to record videos of the woman in the showerand undressing.

Chin also developed a "crush" on another female friend and planned to film her in various states of undress or take upskirt videos of her when giving her a lift in his car.

Some time in June 2014, he invited the second victim to his home and secretly filmed her using the toilet.

In another incident involving the second victim, the court heard that Chin was with her in a test car when he used a mobile phone to record a video of her undergarments.

His son and her children were also in the car.

Chin's wife found videos and images of her female friends, including the first victim, when she was using his mobile phone in July 2015.

She later found that he had placed various spy cameras, some of which were hidden in everyday household items, and kept an assortment of women's underwear.

When queried, he threw away the items and claimed he would delete all the videos and images taken of women using the bathroom.

She then reported him to the police.

His lawyer, Mr Tan Hee Joek, said the father of one, who is not working now, suffers from two types of paraphilic disorder - voyeuristic and fetishistic - which a psychiatrist said caused him to commit the offences.

He said Chin is being treated, and is attending therapy and counselling to address his mental disorders.

Chin's wife, a legal counsel, has forgiven him.

Their relationship has improved tremendously, he said.