As Singapore enters the second week of its circuit breaker period, most of us are following the rules and taking proper precautions. Unfortunately, it seems that some have not gotten the memo.

A woman who flouted circuit breaker regulations at a Shunfu hawker centre on April 14 and refused to co-operate with SG Clean ambassadors and police officers will be fined $300, the National Environment Agency (NEA) said.

The woman, who remains unnamed, also had her details taken down by the police.

She was slammed online after videos emerged of her defiantly filming two police officers with her phone at a wet market and attempting to walk away from them.

The woman was not wearing a mask and could be heard saying in one clip: "You're going to arrest me? On what charge?"

She had insisted on eating her meal at the hawker centre at Block 320 Shunfu Road and "turned aggressive" when SG Clean ambassadors approached her, NEA said in a statement on April 15.

The police were subsequently activated.

Read Also
'It's my problem if I die': Auntie refuses to wear mask at People's Park Centre 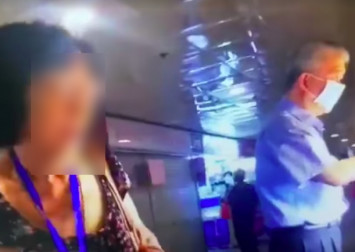 "We will not hesitate to take strong actions against such egregious offenders, including criminal prosecution if necessary," NEA said.

"Cases of physical or verbal abuse will be reported to the police for follow-up, and these cases will be considered separately from the principal offence that NEA will be charging the offender for."

During the circuit breaker period from April 7 to May 4, dining at hawker centres is not allowed.

NEA had previously said that wet markets would refuse entry to those not wearing masks from April 12.

But following National Development Minister Lawrence Wong's announcement on Tuesday evening (April 14), it is now mandatory for all members of the public to wear a mask whenever they leave the house.

First-time offenders caught flouting the rule will face a $300 fine.