It was supposed to be a fun Saturday night out with an old friend visiting from the UK.

But things turned out quite differently for Ms Uma Mageswari when she caught a man secretly filming her on a North-East Line (NEL) MRT train.

She had boarded the train at Outram MRT station on the evening of May 13 and was heading towards Harbourfront MRT station.

Ms Uma said she noticed a man sitting in front of her but didn't think much of it and continued scrolling through her music playlist on her phone.

She looked up again and saw the same man holding his phone up, and seemed to be pointing the camera at her.

She started to suspect that she was being filmed and while she felt herself turning mad, she said she forced herself to keep calm and did the same thing to him - she whipped out her phone and started filming the man too.

She then posted the video on her Facebook page a few days later with an account of what happened and even some details of the man as well.

It didn't take long before it went viral in Singapore. At the time of publishing, the video has garnered over one million views.

Read Also
Caught in the act: Woman exposes man who secretly filmed her on NEL train 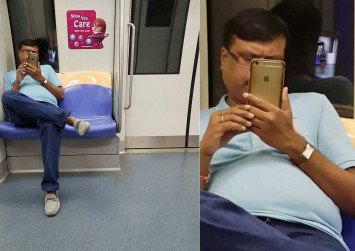 In a phone interview with AsiaOne, Ms Uma said she had already been planning on how to confront the guy - while filming him - during the three to four minutes she had before the train reached its final destination at Harbourfront station.

"There was no doubt on my mind that I was going to confront him. No way was I going to let him get away," Ms Uma, 36, said.

"My body that you perceive to be a weakness is going to be my weapon."

The moment the train pulled to a stop, the former volunteer counsellor said she got up and blocked him from exiting the train.

She said she immediately asked him about the recording and demanded that he show her his phone.

According to Ms Uma, the man did not oblige, but she managed to get him to follow her out of the train carriage and to the control station to seek help after an MRT staff advised her to do so.

My body that you perceive to be a weakness is going to be my weapon.

"He didn't try to run away but I was prepared to chase after him if I had to," said Ms Uma.

She said the control station staff rendered help as soon as she told them what happened, and one of them offered to call in the police. By then, Public Transport Security Command (TransCom) officers had also stepped in to help.

According to Ms Uma, the police also arrived "within minutes".

This was when Ms Uma found out more information about the perpetrator and learned that his name was Suraj. According to her, Suraj is married with a son.

Ms Uma said he told the police that he was using "a new phone" and didn't know how to use its buttons properly. He also added that Ms Uma reminded him of his own sister.

"He didn't offer an apology before but suddenly he wants to say 'sorry' to me," she said.

She told AsiaOne that if she was going to be a victim, "I'd rather be someone's last".

"Let my voice be heard each time he attempts to whip out his phone (to film a woman in secret)," said Ms Uma.

The police have since classified the case as intentionally causing alarm under the Protection from Harassment Act. Investigations are currently ongoing.

Staying positive despite everything

Although Ms Uma admitted that the incident was rather embarrassing, she was inspired to talk about it publicly after she related the incident to two of her goddaughters, aged 11 and 12.

"I told them, 'Don't look for people to help you, be your own hero'," Ms Uma shared, adding that thousands have sent her friend requests as well as private messages on Facebook.

She maintains that she is "humbled" and appreciates the words of strength from strangers, especially those who stepped forward to share similar experiences of their own with her.

She also believes that Singaporean women would do the same as she did and take action if they were in a similar situation.

On naysayers who slammed her for speaking up, Ms Uma said: "This is me and the way I look at it - I'd like to take something positive out of this experience."

In fact, she sees it as the "best belated birthday present" she's received this year as she had just celebrated her birthday last week.