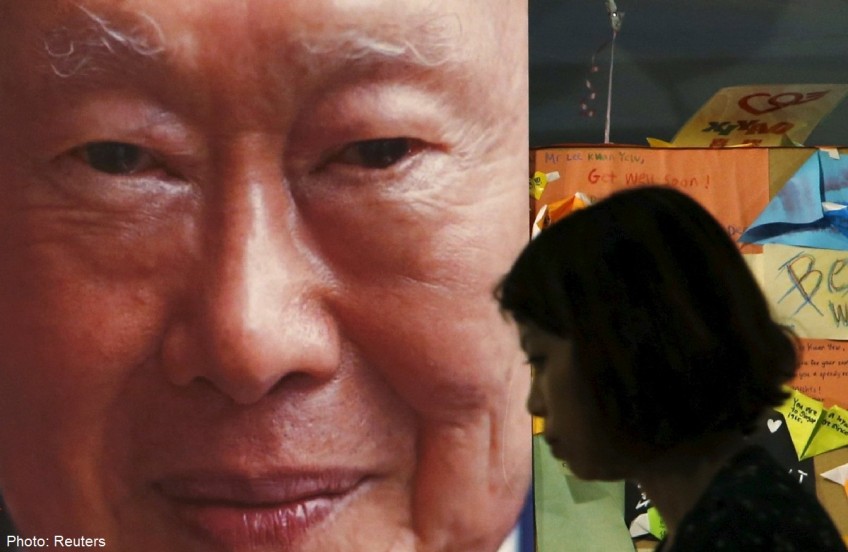 A woman passes a picture of former Singaporean prime minister Lee Kuan Yew, placed at a well-wishing corner at the Singapore General Hospital in Singapore March 23, 2015.

SINGAPORE - The United States and China on Monday led global acclaim for Lee Kuan Yew, the Singaporean statesman whose shrewd and sometimes caustic views on world affairs were much sought by his fellow leaders.

Lee is widely credited with transforming Singapore from a sleepy British imperial outpost into one of the world's wealthiest societies as leader from 1959 to 1990.

"He was a true giant of history who will be remembered for generations to come as the father of modern Singapore and as one of the great strategists of Asian affairs," US President Barack Obama said.

Lee's views "were hugely important in helping me formulate our policy of rebalancing to the Asia-Pacific", Obama said in a statement.

During his rule, Lee positioned Singapore as a key plank of America's regional security architecture. And in a Forbes interview in 2011, he rejected the notion that Washington was doomed to "second-rate status".

He cited America's track record of economic innovation, its willingness to attract foreign talent and the fact that English is the world lingua franca - all strengths he exploited in Singapore's own rise.

But Lee was also an early proponent of the view that China would become a force to be reckoned with, recounting in one of his books a meeting with newly emerged paramount leader Deng Xiaoping in 1978.

Lee wrote that he told Deng: "Whatever we have done, you can do better because we are the descendants of the landless peasants of south China.

"You have the scholars, you have the scientists, you have the specialists. Whatever we do, you will do better." As they opened China up after 1978, Deng and his Communist colleagues cast a keen eye on Lee's model of rule - marrying economic liberalisation with rigid political control.

Foreign ministry spokesman Hong Lei said Monday that Lee was the "creator and founder" of ties between the city-state, which is ethnically majority Chinese, and the world's most populous country.

Hong lauded him for making "historic contributions" to the relationship, adding: "He was also a strategist with both Eastern values and international perspective."

'A lion among leaders'

In the years after Britain's withdrawal from outposts around the world, Lee created modern Singapore out of a short-lived and stormy political union with Malaysia. Their ties remained turbulent down the years.

In the years after Britain's withdrawal from outposts around the world, Lee created modern Singapore out of a short-lived and stormy political union with Malaysia. Their ties remained turbulent down the years.

But in mourning Lee, Malaysian Prime Minister Najib Razak lauded his "determination in developing Singapore from a new nation to the modern and dynamic city we see today".

"His achievements were great, and his legacy is assured," he said.

Lee's political vision was forged in World War II, when Japan routed British and Australian troops to occupy Singapore. He studied law at Cambridge University in the years after, returning home convinced that Asians must now be masters of their own destiny.

Prime Minister David Cameron noted that Lee was "sometimes a critical" friend of Britain but stressed his "place in history is assured, as a leader and as one of the modern world's foremost statesmen".

India's reformist Prime Minister Narendra Modi also reflected on Lee's legacy, tweeting: "A far-sighted statesman & a lion among leaders, Mr Lee Kuan Yew's life teaches valuable lessons to everyone." One lesson that Lee sought to impart was delivered in a sharp-tongued warning in 1980, when he said that Australians risked becoming "the poor white trash of Asia" unless they opened up their economy.

"Our region owes much to Lee Kuan Yew," Australian Prime Minister Tony Abbott said, adding that "today we mourn the passing of a giant of our region".

In recognition of his outsized standing on the international stage, Lee was sometimes spoken of as a potential UN secretary-general. Ban Ki-moon, who holds the job today, called him a "legendary figure in Asia".

[[nid:182588]]
SUBSCRIBE TO OUR NEWSLETTER
Your daily good stuff - AsiaOne stories delivered straight to your inbox