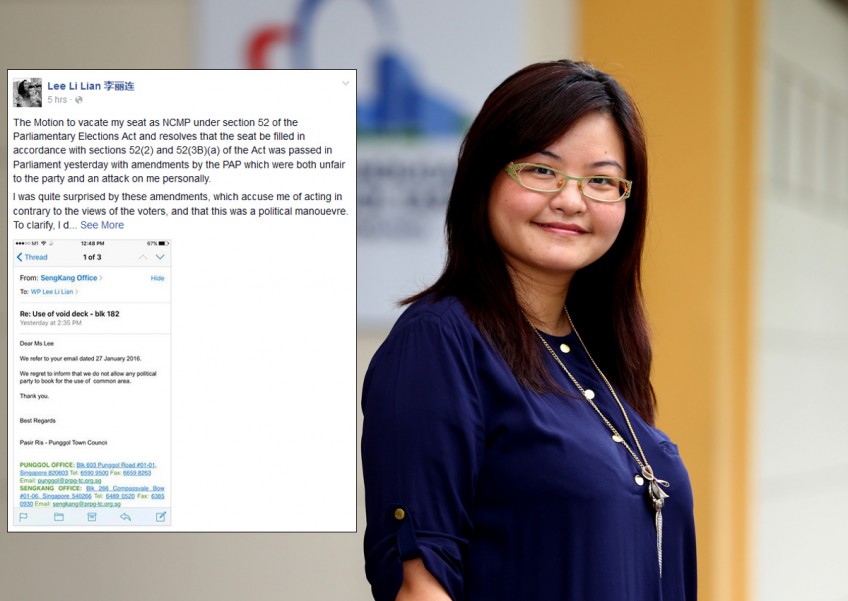 After a five-day debate on filling the third Non-Constituency MP (NCMP) seat, Ms Lee Li Lian of the Workers' Party (WP) gave her thoughts on the issue.

In a Facebook post on Saturday afternoon (Jan 30), Ms Lee said the motion that was passed in Parliament yesterday with amendments by the People's Action Party (PAP) were "both unfair to the (Workers' Party) and an attack on (her) personally."

WP MPs, however, abstained from the vote.

Mr Charles Chong, who defeated Ms Lee at the polls last September, said in Parliament that she had let down the voters who supported her.

Ms Lee said in her Facebook post: "To clarify, I did not contest the General Elections to be an NCMP, but an elected member of the house with the full responsibilities involved in representing my constituents.

"Having lost my MP seat to Mr Charles Chong, I stepped aside in line with what the voters had expressed. Mr Chong suggested in Parliament that I should have respected the 'decision of the minority' who voted for me, by taking up the NCMP seat."

The Motion to vacate my seat as NCMP under section 52 of the Parliamentary Elections Act and resolves that the seat be...

According to a My Paper report on Sept 17 last year, an Elections Department (ELD) spokesman had responded to queries by stating that the Attorney-General's view is that if any elected NCMP who "fails to take and subscribe before Parliament the Oath of Allegiance under Article 61 of the Constitution" at the first or second sitting of Parliament after the General Election, "then Parliament may at its discretion declare that seat vacant".

The decision to fill the seat rests with Parliament.

Along with her Facebook post, Ms Lee also attached an image screengrab of an email response from Pasir Ris-Punggol Town Council that showed her rejected application for the usage of a Housing Board void deck.

She explained that she had tried to apply to the PAP-managed Town Council to hold a charity food distribution event in Punggol East on Jan 30 but was rejected as the Town Council "do not approve applications made by political parties".

The NCMP-elect then recalled how she "was never successful" in her applications during her time as an MP to hold events within areas managed by the Housing Board.

She ended her post by saying that she will continue her "outreach and grassroots activities" and her "mission to make a difference to the lives of people in (her) own way".