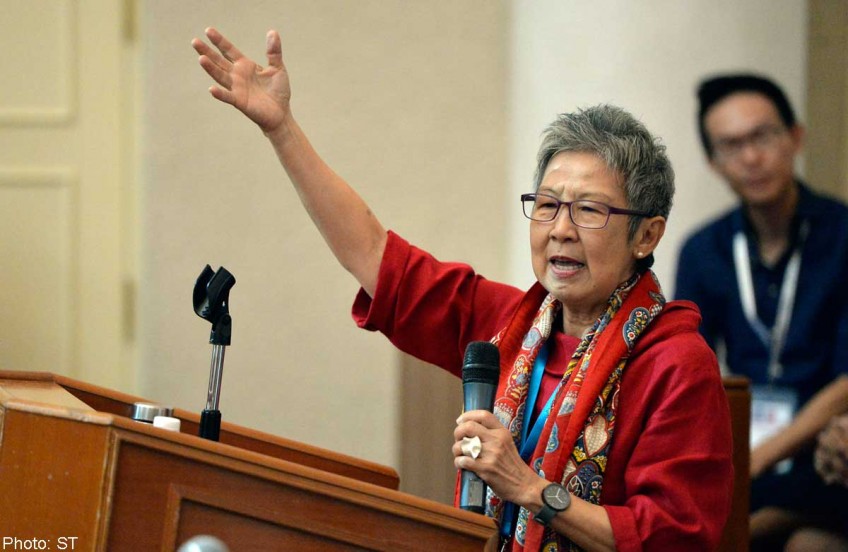 Novelist Suchen Christine Lim and other writers are expected to speak out against the National Library Board's removal of children's books at a writer's conference at the Arts House.

At a literary conference at The Arts House yesterday, she called on the audience of 100 local and international writers to stand up and shout "good wishes to the children whose families do not fit the one-man-one-woman-and- their-children model".

In her keynote address on the first day of the Asia-Pacific Writers And Translators Association conference, she said NLB's action disregarded the feelings of single parents and alternative families like hers and those of her friends.

News broke on Tuesday last week that NLB had withdrawn three children's books from public library shelves after complaints, and the titles would be destroyed or "pulped".

The books are: And Tango Makes Three, based on the true story of two male penguins which hatched an egg; The White Swan Express: A Story About Adoption, featuring a lesbian couple and single mother among others; and Who's In My Family?: All About Our Families, which features various family structures.

Lim, 65, raised her two sons as a single parent and was also brought up in a single-parent family for a time before her mother remarried.

She said: "In removing and pulping those books on various family structures, the National Library Board is telling these children that they and their families don't count... It is as if the NLB is saying if you do not like a book, if you judge a book to be offensive or contrary to your beliefs, destroy it."

Also present was writer Felix Cheong, 49, who, along with other authors, withdrew last week from an NLB panel in protest against the books' removal.

He said: "It was great to see so many writers, foreign and local, standing up to affirm what has always seemed obvious to me - that state institutions remain secular; that we must not hide behind PC (politically correct) terms like 'pro-family' without asking what that term truly means."