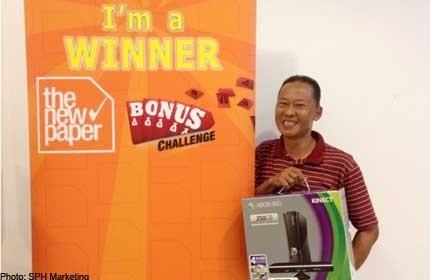 SINGAPORE - If he had not found that copy of The New Paper at the coffee shop on Monday, PUB technical officer Hashim Hayon would have given up.

"It was at the coffee shop in Toh Guan where I grew up. (That was the) only copy left, so I grabbed it," the 52-year-old said.

That paper won him an XBox Kinect in our Bonus Challenge, which he says is a great belated Hari Raya present for his four children - three boys and a girl.

"The oldest is 26 and the youngest, my daughter, is 18. My younger boys had wanted to buy an XBox Kinect earlier, so this is my gift to them," he said.

Mr Hashim had visited five to six shops around Bukit Batok on Monday morning in search of the paper.

"There were none. All of them ran out," he said. "If I hadn't found that last piece, I would have given up."

And it seems as though fate was playing with him. After buying a copy of TNP on Tuesday, Mr Hashim said he left it in his car.

"I was on leave and I had just returned home around 3pm. I forgot all about it until about an hour later. Luckily I remembered, otherwise I would not have won," he said.

Mr Hashim said he had taken part in the earlier TNP Bingo challenge, but did not win anything.

"Like Bingo, Bonus is quite easy to play," he said.

Mr Hashim said he will continue to play until October.