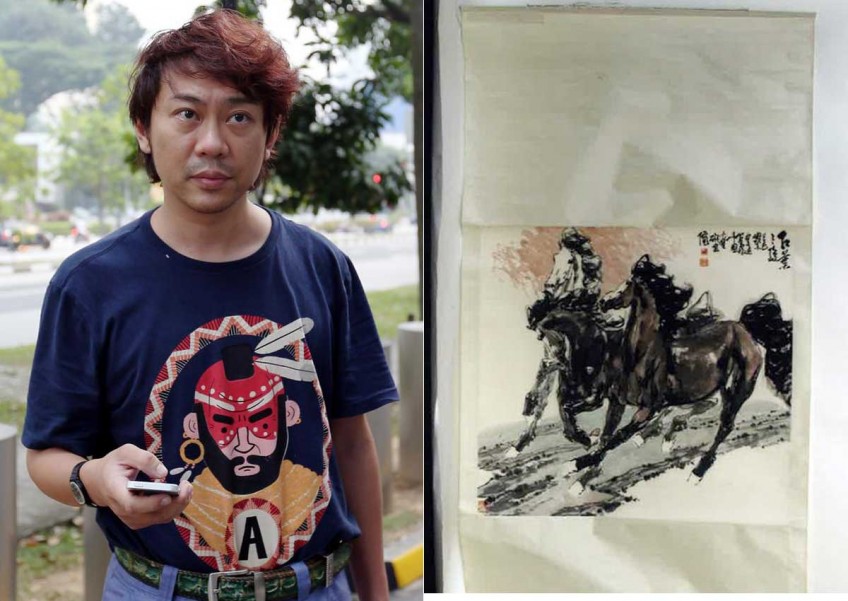 Art expert rubbishes ex-tour guide's claims about cost of works he had bought for Madam Chung.

A painting which Yang Yin claimed he had bought for $500,000 was dismissed by an art expert yesterday as nothing more than a cheap fake that would have cost $200 in a night market.

Madam Lim Sew Yong, chairman of Raffles Fine Arts Auctioneers, also rubbished a set of five other paintings the former tour guide from China said he had bought on behalf of a widow for $600,000.

Madam Lim was taking the stand on the third day of Yang's trial, in which the 42-year-old is fighting charges that he dishonestly misappropriated $1.1 million from Madam Chung Khin Chun, a wealthy widow he met in 2008, and a year later moved into her Gerald Crescent bungalow.

He claims that he used the money to buy paintings for Madam Chung, a known art lover.

But yesterday, as he stared on impassively, the court heard that the paintings were worth far less.

The prosecution called on Madam Lim, who set up Raffles Fine Arts Auctioneers in 1992. She had been asked to look into the paintings bought by Yang Yin.

One was titled Horse Drinking Water, which Yang claimed was by renowned Chinese artist Xu Beihong and cost $500,000. It had been folded several times and stuffed into an envelope, which was found in Yang's luggage during a police search.

Madam Lim said it was an imitation based on two original works by the artist. "If this were to be sold in the pasar malam, China night market, it would be worth about 1,000 yuan - equivalent to $200," she said.

Madam Lim said she knew the artist's wife, who told her that the original paintings were done on double-layered paper. The painting Yang had was not, and it also appeared "relatively new".

Deputy Public Prosecutor Sanjiv Vaswani asked if an original would have been "folded up like a roti prata?". Madam Lim said no, adding it should have at least been rolled up and kept in a box.

"As a collector I would not treat the painting in this manner."

As for the other pieces, Madam Lim said they were neither masterpieces nor coveted by high-paying collectors. Two were original while the others - including one of a woman lying on a couch, were either lithographs copied by machines or of "not very high quality".

Yang's lawyer Irving Choh argued, however, that value of art is not a science and it is up to the buyer to decide how much he is prepared to pay. In the market, it is "willing buyer, willing seller".

Mr Choh also highlighted the testimony of Mr David Fu, director of auction house 33 Auction, who said the painting of the woman lying on the couch was bought by Yang for $8,960 at an auction in 2011.

But when DPP Vaswani asked Madam Lim if she would believe anyone claiming to have bought the paintings for $600,000, outside of an auction, she said no. And if someone did, "that person would be stupid".

Also taking the stand yesterday was Madam Chung's relationship manager at OCBC for the period 2009 to 2010.

He said Madam Chung did this because she was getting old, and wanted someone to help run her financial affairs. That did not mean Yang had any share in the money, he added. "The accused can only operate the account as Madam Chung sees fit," said Mr Huang.

Her accounts included unit trust investments, which were "substantial", he explained. He told the court that as he went through the investments with Madam Chung and Yang, he noticed how the latter seemed interested in them.

He "leaned forward", recalled Mr Huang, and he "opened his eyes bigger".