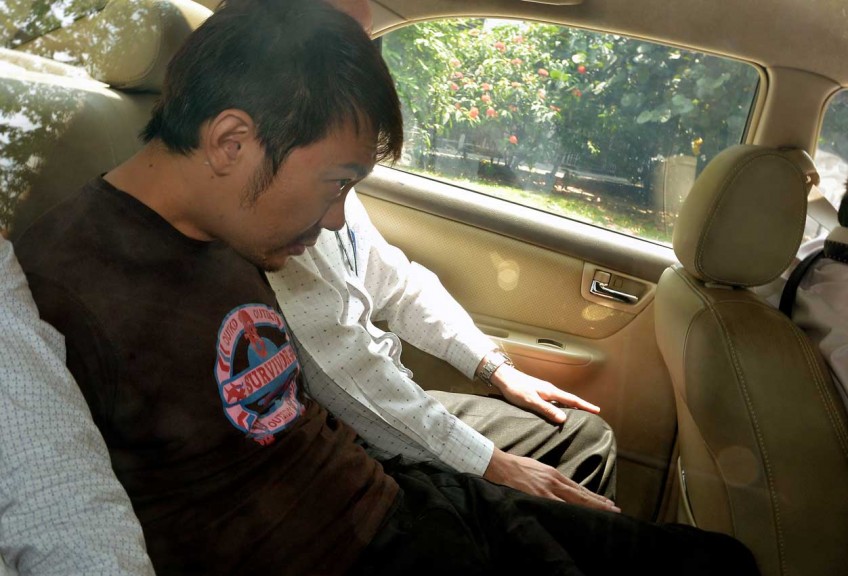 In a mid-trial twist that caught both the prosecution and defence by surprise, Yang Yin yesterday told the court he wanted to plead guilty to misappropriating $1.1 million from an elderly widow.

His change of heart came on the trial's fifth day, which was also the first day that his 89-year-old alleged victim was in the court gallery for this trial.

By then, the prosecution had already presented a number of witnesses, including an art expert who testified that a painting Yang claims to have bought for $500,000 for Madam Chung Khin Chun at a flea market in China was nothing more than a fake worth $200.

Yang's decision to plead guilty came after the court took a 15- minute mid-morning break. Just before the trial was set to recommence, his lawyer, Mr Irving Choh, asked the court clerk for more time. Mr Choh was overheard asking him: "You will not change your mind?"

Yang nodded. Mr Choh then told the court: "My client, in an unusual twist, has decided to plead guilty to two charges."

Yang had in May pleaded guilty to 120 other charges, which involve falsification of receipts to make it appear that a business he set up was real, and offences involving his permanent residency.

He had decided to fight charges that he misappropriated $500,000 and $600,000 from Madam Chung, who was diagnosed with dementia in 2014 and has no children, on two separate occasions.

One key piece of evidence presented by the prosecution was a painting of a horse, which was folded repeatedly and stuffed into an envelope found in Yang's luggage.

He first told police it was by renowned Chinese artist Xu Beihong and that he had bought the painting for $500,000 at the request of Madam Chung. He later told police that the $500,000 was actually a "gift" to him from the widow.

The sum of $500,000 was transferred from Madam Chung's OCBC Bank account to Yang's account, then back to hers before ending up in a China account belonging to Yang's father.

On the second sum of $600,000, an OCBC Bank relationship manager told the court Yang had asked for the sum in cash in 2012, claiming it was needed as collateral, among other things, for an art gallery in Hong Kong.

On the witness stand yesterday, Deputy Superintendent of Police (DSP) Jane Lim told the court that Yang gave a different account. He claimed he withdrew the $600,000 to buy five paintings. But DSP Lim said Yang could not provide details of the paintings, including how much each cost. He also could not produce receipts of these purchases.

The Straits Times had first reported on Yang's relationship with Madam Chung in 2014. Yang got to know Madam Chung when he served as her private tour guide during a trip to Beijing in 2008. A year later, he moved in to stay with her in her Gerald Crescent bungalow.

In 2014, Madam Chung's niece, Madam Hedy Mok, began a series of civil actions, claiming her aunt had been unduly influenced by Yang.

Mr Choh told reporters that Yang decided to plead guilty after he saw Madam Chung. He said Yang had tried to make eye contact with her, but "his heart ached when he saw that she did not recognise him".

Reacting to Yang's decision to plead guilty, Madam Mok said it would bring some "closure" to her and her aunt. The case is scheduled to be heard next on July 27.