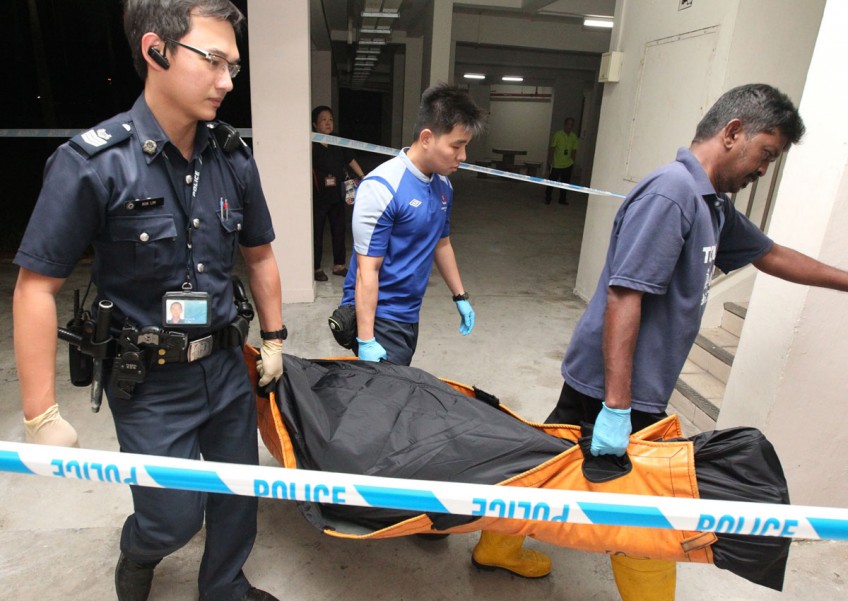 A 76-year-old retiree died in his Yishun flat on Saturday night after an alleged dispute with his 34-year-old tenant, a woman from Malaysia known as Jennifer. She has been arrested.

The Straits Times understands that there was a fight outside the flat at Block 114, Yishun Ring Road before the victim, William Wong, went in and that he suffered cuts on his arm.

"There was so much blood," his widow, Winnie Teo, told The Straits Times.

At about 11pm, the 58-year-old part-time cleaner had been returning home from work at a foodcourt in Orchard Road when she saw that the staircase leading to her three-room unit on the second floor had been cordoned off by police.

She had earlier received a call from her boss, who had previously introduced Jennifer to her.

Her boss told her that a crying Jennifer had called him to say that Mr Wong was bleeding profusely.

There were blood spatters in the common corridor, said Madam Teo. According to Shin Min Daily News, blood trails as long as 10m could be seen along the corridor.

Police said they received a call for assistance at about 10pm on Saturday, and found Mr Wong lying motionless in his home. Paramedics declared his death at 11.38pm, upon their arrival.

Earlier, the Singapore Civil Defence Force, who received a similar distress call at 10.55pm, had to use a grinder on the padlock of the living room window to enter the unit.

When Madam Teo arrived at her block, she thought her husband had a fight with Jennifer and was injured.

It was only while being questioned by the police that she realised Mr Wong had died. Unable to accept this, she made more than 10 calls to her husband's mobile phone, Lianhe Wanbao reported.

"I didn't know he died," she wailed as the truth finally hit her, Wanbao said. The couple married 21 years ago.

Neighbours told Wanbao that they heard an argument around 8pm on Saturday and there was further commotion at around 11pm.

Madam Teo told Wanbao that her husband often argued with Jennifer as they were both hot-tempered, but this was the first time their argument had escalated into physical conflict.

"A couple of times, she threatened to burn the flat down," said Madam Teo.

Jennifer had previously worked as a dishwasher for Madam Teo's boss, but switched jobs a couple of months ago. She paid the elderly couple $250 a month to rent a room.

Mr Wong had a son and a daughter from a previous marriage, said Madam Teo, who is childless.

"He had another son who died in a traffic accident when he was 15 more than 30 years ago," she told The Straits Times. "My husband thought of his son every day."

The case has been classified as an "unnatural death". Investigations are ongoing.